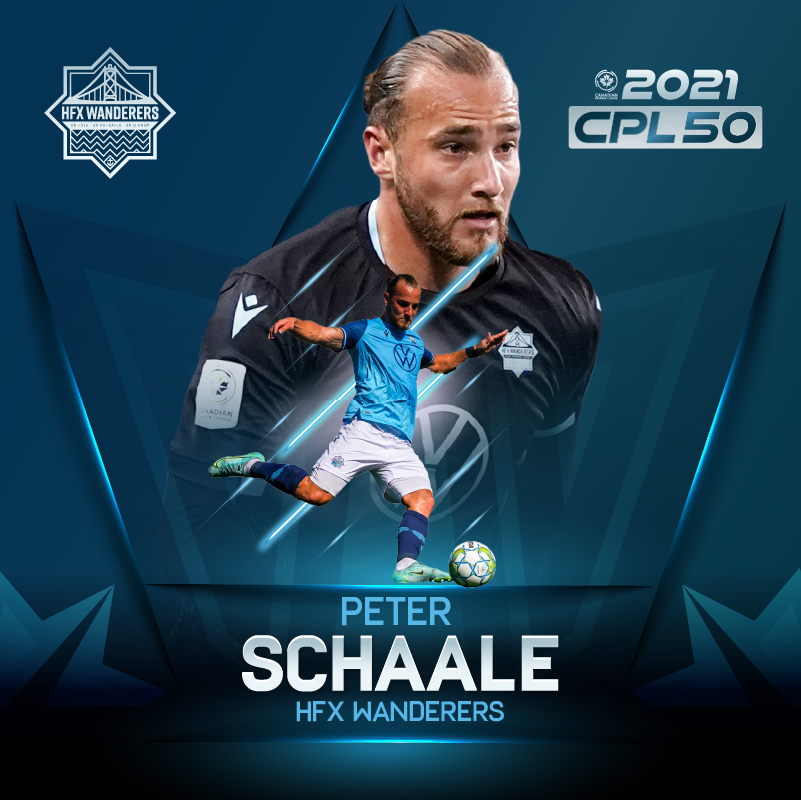 Welcome to CPL50, a series where we’ll reveal the top 50 players from the 2021 Canadian Premier League regular season, as voted on by a panel of coaches from all eight teams and media from OneSoccer and CanPL.ca.

For more information on the voting process and method, click here.

HFX Wanderers defender Peter Schaale kicks off the top half of the CPL50.

The third HFX Wanderers player thus far in the list, after Jérémy Gagnon-Laparé (#46) and Andre Rampersad (#38), Schaale was again one of the club’s most important players in 2021. In his third season with the club, he made 21 appearances, his most yet in a single CPL season.

The German centre-back, picked up by the Wanderers in the 2018 CPL U-Sports Draft, finished second in the league in blocks (21) and third in clearances (87). He also led HFX Wanderers in aerial duels won, with 40.

Schaale also pitched in with a goal and an assist at the other end of the pitch, playing 1,678 minutes in total in 2021.

The 25-year-old has been a rock at the back, and an important leader for Stephen Hart’s side over the past three seasons.

The Wanderers had a stingy defence in 2021, allowing 34 goals in 28 regular season matches, tied with the champions Pacific FC for third-fewest, and Schaale was a big part of it. He missed a handful of matches with an injury suffered at The Kickoff in Winnipeg, but returned a few weeks later and didn’t look back.

He is under contract through the end of the 2022 season, with an option for the 2023 season, and will continue to be an important player going forward for the club.

The rest of the CPL50 countdown is available here. Five more players will be revealed per day until December 22.