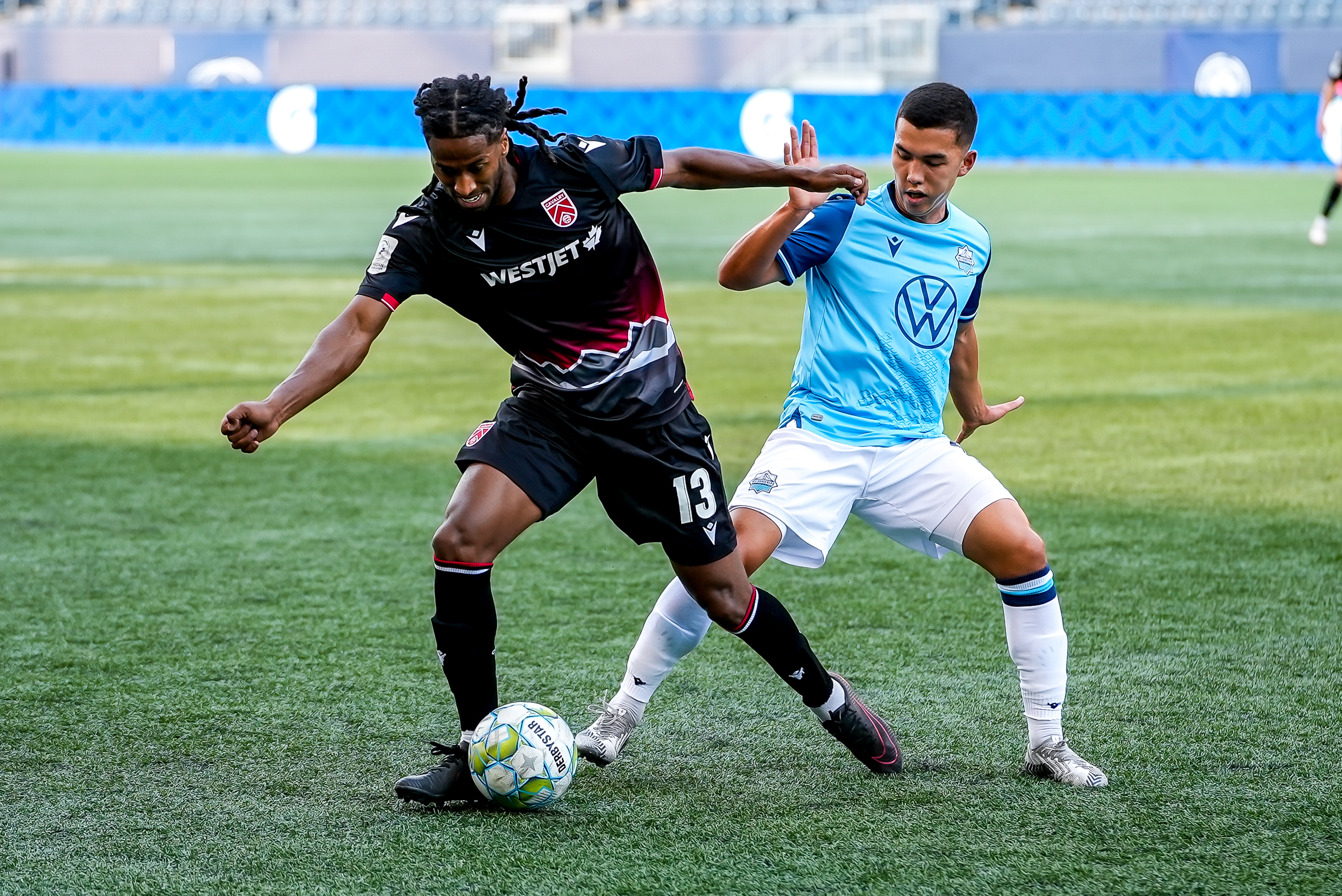 Cavalry FC were their energetic selves once more on Saturday as they took the initiative in an emphatic 2-1 win over HFX Wanderers. With an aggressive formation to begin the match, they finally broke through to end their scoreless drought just before halftime with a goal from very direct play courtesy of Anthony Novak. They added another not long after the break, with a curling Ali Musse strike finding the net with help from a deflection.

The Wanderers pulled one back late thanks to Samuel Salter, but that was the only of their myriad chances they managed to finish.

After a few frustrating outings in recent weeks, Cavalry looked to have regained some of their mojo in this match. They started with energy, and their high press was threatening. With a front three clearly instructed to run at the HFX centre-backs — freed up to do so by the Cavs’ high wingbacks — they really put their opponents on the back foot.

Ali Musse, Anthony Novak, and Ahinga Selemani all logged significant mileage, forcing the Wanderers’ Kareem Sow and Mateo Restrepo to, more often than not, turn to play backward to the goalkeeper (HFX passed to Christian Oxner 23 times on Saturday), or attempt a risky forward move that could be intercepted. Daan Klomp and Karifa Yao, two thirds of Cavalry’s back three, both have the pace to spread the pitch and allow Mo Farsi and José Escalante to get forward along the touchlines safely, and that put even more pressure on the Wanderers to play into uncomfortable situations.

“We had this thought that nothing changes if nothing changes,” Tommy Wheeldon Jr. quipped postmatch. “We’ve played a 4-3-3 for a while, we switched it to a 3-4-3. We were a little bit more baiting with our press; I thought the front three worked tirelessly, and what’s pleasing is two out of that front three get a goal and the other one gets an assist, so credit where it’s due.”

Cavalry’s structure changed several times through the match as well, with a more rigid 4-4-2 coming nearer the end with Daniel Kaiser’s addition, but Wheeldon explained that his ever-changing formation was partly down to a similar chameleon across the pitch from them: “That tactical flexibility is in credit to our opposition as well, because everybody’s getting better, because they started out in a 4-5-1 and switched into a 4-3-3 and then 4-4-2, so as they made their change and started to get it we had to change ours, so it was a terrific chess match.”

The shifted formation is nothing new for Cavalry, who have swapped fluidly between a back three and back four over the years, but they seemed to enter the game with new life thanks in part to the change, with a lot of attacking acumen (and desire) on the pitch from the get-go to end their slump.

Mesut Mert was a little frustrated with his Wanderers side after this game, in which they put 14 shots toward the frame but scored just once. Stefan Karajovanovic and Akeem Garcia continued to look snakebitten, neither of them having scored yet this year despite an abundance of opportunities, and at this point it’s likely cause for a little concern in the HFX camp.

Mert called the result “deflating,” to not be rewarded yet again for a performance in which he felt his side showed great character. Ultimately, the 2020 finalists haven’t quite looked as fluid going forward as they were last year — though they had stretches in the second half on Saturday where they were perhaps closer than ever, finally causing problems for Cavalry with some very dangerous counter-attacks. Still, Mert would like to see his team a little more aggressive, and perhaps look for new ideas or options with the ball — a few formation shifts in this match definitely indicated an attempt to try something different.

“I tell the boys, if you’re not successful in one side of the game, you have to be able to find another part of your game that’s successful, that’s affecting the game,” Mert said. “For (Garcia), the goals are not coming for you right now, and they will. But let’s affect the game in a different way, whether it’s your game with your back to goal comes alive; you come in, take a touch, bump it off, get your wingers involved, that’s the game that he has to improve. And if that’s not going, maybe it’s you pressing — guiding the ball to one side.

“For the players, it’s not just focusing on one part of their game, but if that doesn’t work, it’s not happening for some of our players right now with scoring, they have to be effective in other areas.”

Cavalry FC are not a side likely to park the bus after going up two goals. After Musse’s 52nd-minute goal, HFX did enjoy a period of sustained pressure — they had 60% possession between halftime and the hour mark — but Cavalry didn’t sit back. Instead, Wheeldon’s substitutions were very positive; Elliot Simmons grew into his midfield role after coming on at halftime, and Victor Loturi was feisty as well.

In the 80th minute, Cavalry made an aggressive double substitution to bring in Richard Luca and Joe Mason (for his long-awaited debut), both of whom are surely among the most technically-gifted and dynamic attackers in the CPL. From that point on, the Cavs were in complete control of the ball, although the Wanderers showed shades of their 2020 selves with a few counter-attacks (one of which ended up in the back of the net).

“Sometimes the best form of defence is attack,” Wheeldon said. “Now and again when you throw on defensive players you’re just shutting up shop, putting the bunker, and you invite Halifax on. They’re a physical side, they’ve got a lot more energy, so why not go the other way?”

He added that there was also a higher purpose to introducing players like Mason and Luca, who are still integrating into a new team: “We want these new players to actually experience that little bit of grit at the end that it takes to win important matches. That was a very professional win, and those guys contributed to it so they’ve learned, they’ve grown from it.”

Wheeldon revealed postmatch that Musse isn’t fully fit, but he still managed to put in 90 of the most dynamic minutes we’ve seen from a CPL attacker in the past week. His goal was well-taken, but he also deserves a lot of credit for how aggressively he and his fellow forwards pressed and created opportunities for themselves at pace.

These clubs will be back in action midweek, as HFX Wanderers look ahead now to a Wednesday night clash against FC Edmonton (7 pm ET/6 pm CT), while Cavalry take on Forge FC in their final contest of The Kickoff on Thursday night (8 pm ET/7 pm CT). Watch all matches live on OneSoccer.