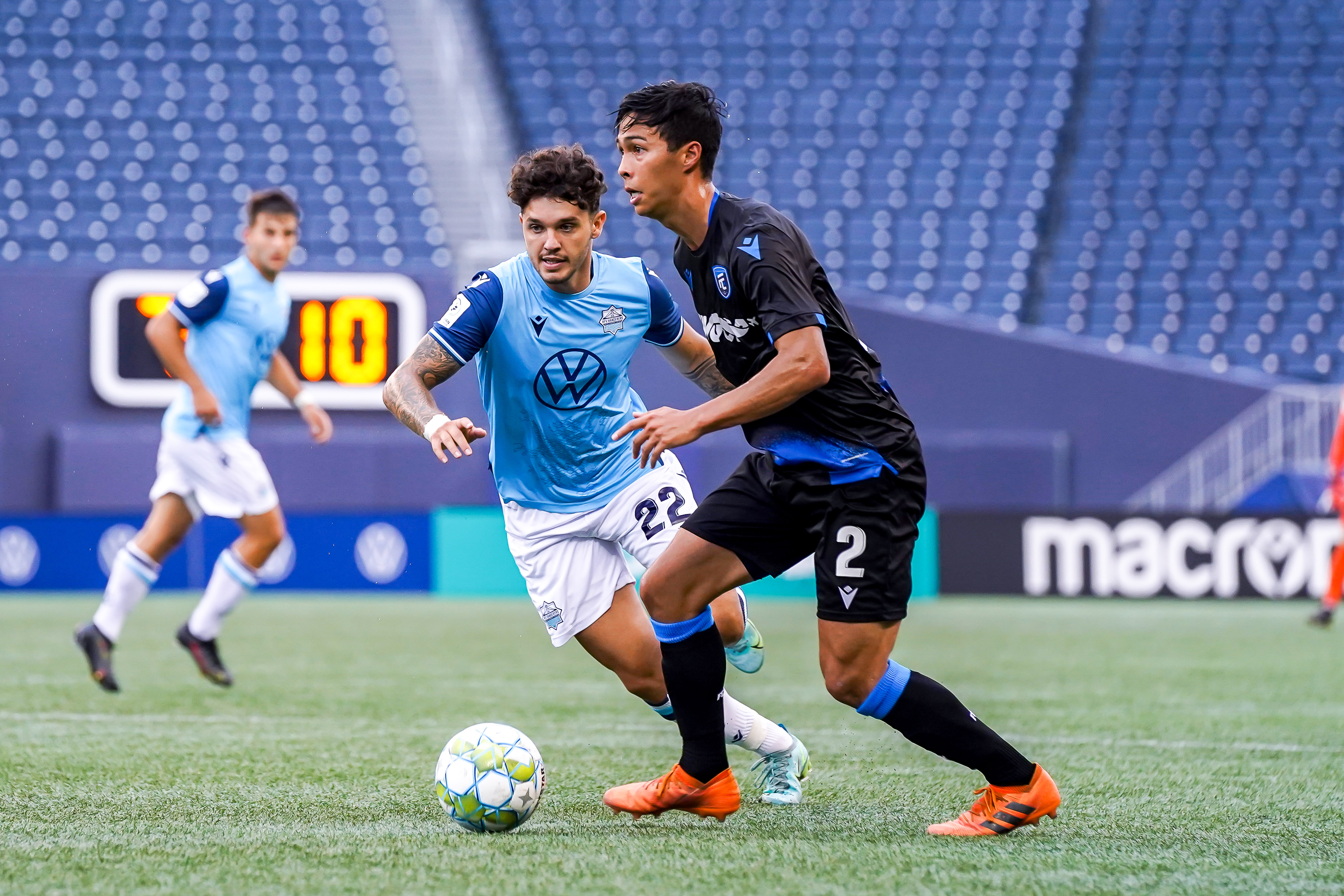 FC Edmonton scored in the final 10 minutes for the second game running to earn some crucial points once again — snatching all three this time around in a 1-0 win over HFX Wanderers on Wednesday evening. Neither side demonstrated too much threat going forward as Easton Ongaro’s 81st minute strike was the Eddies only shot on target all match (Halifax had only two.) A goalless draw looked near inevitable before Fraser Aird was introduced by head coach Alan Koch, proving a true difference maker off the bench.

As Edmonton celebrate one striker breaking his goal drought in Ongaro, concerns over the fitness of fellow frontman Tobias Warschewski may slightly damper celebrations as the German forward was forced off in some serious discomfort after 56 minutes played. Koch didn’t elaborate any more on the extent of the injury and more clarity will come in the upcoming days.

Neither side managed to create too many clear cut scoring opportunities on Wednesday but given they had over 60% of the possession and came away with nothing to show for it, the Wanderers will likely be the more frustrated of the two teams.

While Mesut Mert suggests Halifax could have played with more tempo and creativity to combat Edmonton’s resolute 4-4-2 defensive setup (more on that later), the HFX assistant coach gave kudos to Koch’s group for the manner in which they kept Wanderers attacks largely to the perimeter: “They were very organized today… they forced us to play in front of them which made it easy for them to reorganize and to slide their whole defensive line out.”

Two compact blocks of four with a pair of forwards ahead of them is sometimes painted in a negative light but there should be no shame for Edmonton in demonstrating a real solidity in their own half, particularly as it’s a new characteristic for this club. “That collective mentality that we’re going to defend for each other is something that we need to have,” Koch told reporters after the match.  “We’re working hard with the group to instill that type of mentality.”

Only table topping Valour (2 GA) have conceded fewer times than the Eddies (6 GA) through seven matches played. If they can continue to stay in games late and get sustained late heroics in the final third, this bubble session of the season should be the last time we see Edmonton in last place in the league standings.

Ongaro gets all important goal

It had been a slow start to the season for Easton Ongaro but with the match winning goal on Wednesday, all his shortcomings to date should be all but forgotten for the Eddies striker — perhaps even a stoppage time penalty miss against York United back on July 4.

While the 6’6 talisman suggested his first was “a long time coming” after the game, he admits the relief of opening his account should alleviate some pressure going forward: “It’s nice to finally get the monkey off my back put one in and hopefully something to build on, it was a massive team effort.”

Throughout the season, Koch has stayed exclusively positive about the way his forwards have performed despite getting no goals from either Ongaro or Warschewski coming into the Halifax game. The full backing of his coach is one of the factors Ongaro attributes to his ability to stick with it.

“Personally it can be hard sometimes when you’re not scoring and the confidence is dropping but when you have a coach like Alan there to really push you every day and maintain confidence in you and tell you what you need to do, it keeps you going and that’s what happened tonight and we got a big win and I finally got my goal.”

With the fitness of Warschewski a big question mark for the near future, Koch may need to lean on Ongaro even harder down the stretch. Getting that first one before heading home to Edmonton next week could be exactly the sort of moment that kickstarts a hot streak for Ongaro.

Halifax attack without Garcia and without creativity

Akeem Garcia’s scoring struggles to start 2021 have been well documented of late and so when Samuel Salter scored off the bench on Saturday against Cavalry, it was far from shocking to see Salter preferred to start over Garcia on Wednesday against Edmonton.

Ultimately, the difficulties in the attacking third continued and served more as proof that service into Garcia has been of the major problems for Halifax this season rather than the striker himself. The majority of the ball was owned by the Wanderers but yet only 20% of the action took place in the Eddies defensive third. Goalkeeper Christian Oxner had more touches on the ball than any of the front four (Alex Marshall, Samuel Salter, Stefan Karajovanovic, Joao Morelli) as HFX had few answers for the opposition’s stingy defensive unit.

“I thought we struggled to, once we did get into those final thirds, to be able to release a runner in behind to just force them to open up more gaps possibly for midfielders to pop into and to receive and to potentially create a chance or a shooting opportunity,” Mert told media after the game. “We’ll have to go back and put more emphasis on that for our next game.”

Although Mert added going with Salter was more of a reward for his strong showing over the weekend than a slight on Garcia, it’s clear whoever lines up in the Halifax attack, they’ll need more fluidity and willing runners if they hope to refind the scoring form they became known for during last year’s Island Games.

It’s not often a player who featured in only a quarter of the match earns this honour but Fraser Aird was the definition of a super sub in this one. Despite getting on for only 23 minutes, Aird had 22 touches, three attempted shots (none closer than his driven freekick off the crossbar) and played provider for Easton Ongaro on the goal as he squared it to the No. 9 for a tap in after winning it off a Wanderers defender in the final third with an aggressive press.

Both teams finish up their time in the Winnipeg bubble on Saturday as Halifax take on the hosts Valour FC (2 pm ET/1 pm CT), while Edmonton closes their account at The Kickoff against York United (5 pm ET/4 pm CT). Watch all matches live on OneSoccer.