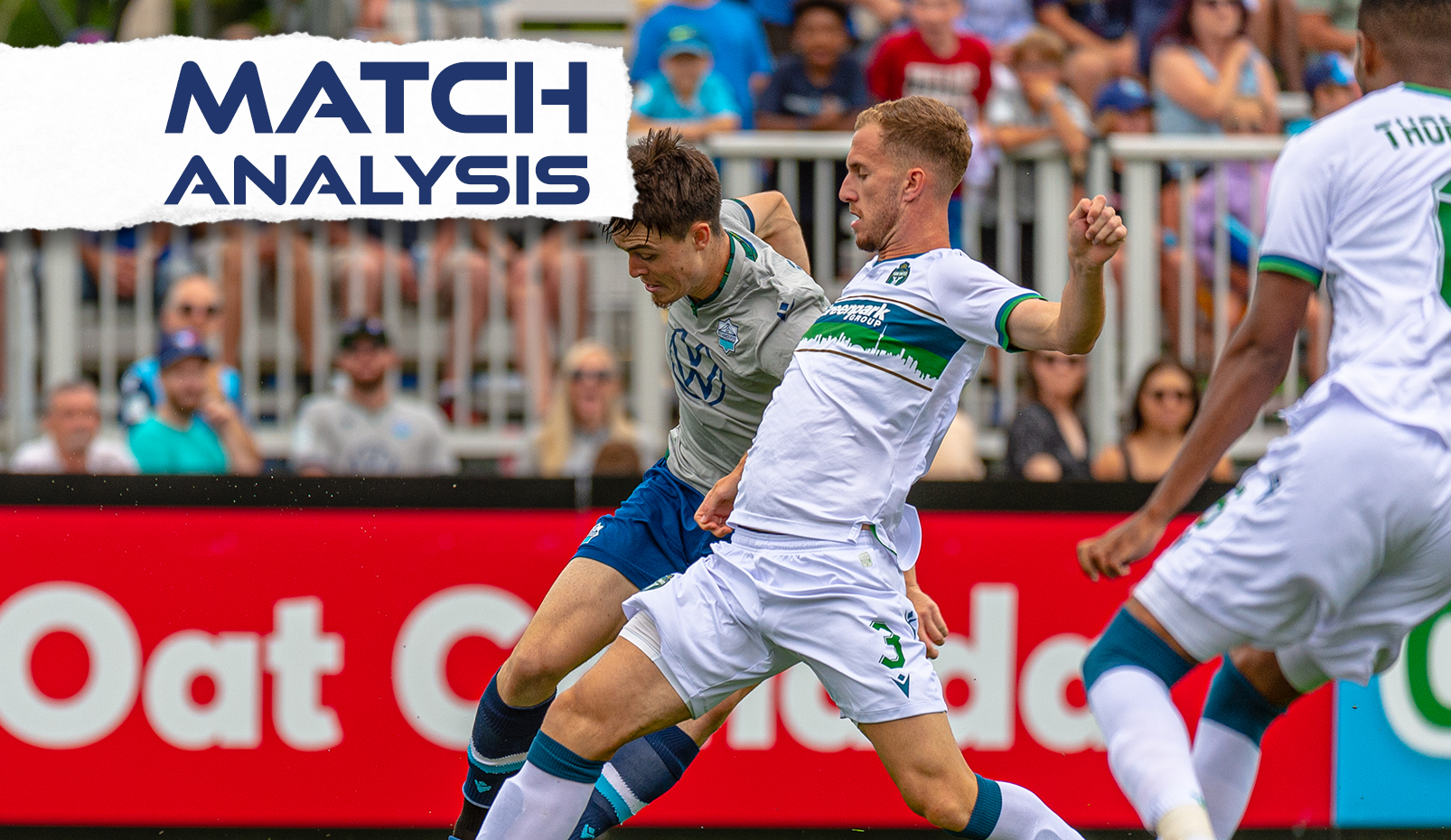 York United found their scoring boots on Monday, as they spoiled the Natal Day party in Halifax by defeating HFX Wanderers FC 4-2. Jordan Wilson got the visitors on the board early with a header off a set-piece, and Osaze De Rosario doubled the lead 20 minutes later with a one-touch finish in the box.

The Nine Stripes picked up in the second half where they left off in the first, as Luis Lawrie-Lattanzio opened his CPL account in the 50th minute. The Wanderers finally found the net just after the hour mark, as Eriks Santos headed home a well-taken corner, but De Rosario followed that up just minutes later with his second goal of the match.

The hosts would add one more goal, as Akeem Garcia finished from the penalty spot, but ultimately it was another frustrating day at the Wanderers Grounds for Stephen Hart’s team, and a much-needed boost for Martin Nash’s York United.

Heading into this game, York United had scored just three first-half goals in the CPL all year. As the lowest-scoring team in the league so far, that’s not entirely unexpected, but the way they’ve struggled to find a rhythm in the early stages of matches has been a concern.

Monday’s game, though, was an entirely different story. Although York lined up with a similar attacking group to what they’ve used in recent contests — Osaze De Rosario up top flanked by wingers (in this case Mateo Hernández and Kevin Dos Santos) — they seemed to play with a renewed urgency going forward, playing more direct passes and through balls for the wingers or wingbacks to run onto.

More than anything, York attacked with a killer instinct they really haven’t had to this point in the season. They were clinical in burying the shots they’d be expected to, but they also seemed more likely to attempt shots or find someone in good position rather than take extra touches or look for the perfect opportunity — which has been a problem for them this year.

One of the greatest criticisms of York’s attacking play at times has been that they don’t score “easy” goals consistently enough — that is, one-touch finishes, tap-ins, set-pieces and the like, which certainly aren’t actually easy to score but perhaps more the bread-and-butter of high-scoring teams that can fill the net in far more different ways than relying on moments of individual brilliance.

“In previous games we’ve maybe taken a shot on earlier instead of playing the next pass; it was nice to see a couple of tap-ins, but it was some great movement,” Martin Nash said of his team. “We got runners in the box and some good finishes.”

In this contest against the Wanderers, York’s three open-play goals all bore the hallmarks of good striker’s instinct and fast-paced, unforgiving attacking play. Rather than playing balls back across the centre in their attacking build-up, they went out wide more often, trusting the pace and quality of their wingers and wingbacks while the opposite flank (plus De Rosario) could focus on finding open pockets in the box.

“Today they did everything I asked,” Nash said. “We got pressure on the ball, we didn’t give them time and space; that’s a talented football team, and we’re able to score timely goals today which was big.”

The killer instinct and speed is a significant sign of improvement from a York team that has truly struggled to put the ball in the net this year. If this is the start of their attack coming together to be more clinical and dangerous, perhaps the latter 10 games of this season will help turn this side into a more dynamic, entertaining attacking unit.

Wanderers punished for slow, disjointed play on and off the ball at home

Not for the first time this season, Stephen Hart cut a sombre figure in his postmatch press conference from the Wanderers Grounds. This was their fourth multi-goal defeat at home in 2022, in a concerning reversal of the club’s historically excellent home form in prior years.

Previously, they’d fallen twice in convincing fashion to Forge FC (4-0 and 3-0 scorelines), plus a 2-0 defeat to Atlético Ottawa in late June. This contest, though, was particularly frustrating for Hart and his players, who will feel like they could have done more to prevent York’s scoring onslaught.

For instance: Of the 19 tackles the Wanderers attempted in this match, they only won seven. For York’s first goal, Andre Rampersad will feel he could have done better to prevent Jordan Wilson from getting above him and finding the header. At moments in the lead-up to York’s other goals, several Wanderers defenders appeared to freeze in the box and didn’t quite react fast enough, giving attackers space and time to finish without being pressed.

“I just think, as a unit, we seem to lose it a bit. It’s what you see York doing today, they defend as a unit and it’s very hard to break them down,” Rampersad told reporters on Monday. “As a unit we need to cover the goalkeeper, cover the box a bit more.”

He added: “Today I blame myself, obviously. Jordan Wilson is putting a header over me, that’s not supposed to happen. It starts from there with me, so I’ve got to look at myself, look in the mirror, and then I can talk about my teammates.”

In a match where they had ample chances of their own and scored two goals in the end, Halifax will be annoyed to have dug themselves into a hole so early on.

For Hart, the biggest issue for his side in this game was that his team didn’t make use of their chances, and York did. He pointed out that the Wanderers had a couple of excellent opportunities early on that they couldn’t score, and then they failed to defend against York’s first few chances — and from there, it’s massively difficult to claw back, especially with how poor his side has been at creating chances to score.

“We really don’t have any excuses. When you look at the game, I was just going over the chances and you have to realize that the opening chance of the game, we got two chances and didn’t even hit the target. If you take one of those chances, who knows what will happen; a number of times we got into good positions but we didn’t test the keeper enough.”

Hart went on to point out that Joao Morelli — who hasn’t played since April, and has just two appearances this year — remains third on the team in shots on target with seven.

Although the story of any 4-2 game is sure to be centred around the attacking play, York deserve some credit for how their recently-adjusted defensive setup has been improving. Earlier in the season, York had one of the best defensive records in the league, playing primarily with a back four of Diyaeddine Abzi, Dominick Zator, Roger Thompson (or Jordan Wilson), and Chrisnovic N’sa.

Since Abzi’s departure at the beginning of July, York coach Martin Nash has tried a few different methods of addressing that hole on the left flank, but they typically struggled in any back-four combination. Looking for something completely different, the last four games have seen York deploy three centre-backs in a 3-4-3 formation. With recently-arrived Australians Tass Mourdoukoutas and Luis Lawrie-Lattanzio proving in recent contests that they can fit in very well at left centre-back and left wingback, respectively, Nash has clearly seen enough he likes to continue with this new setup — even though it hasn’t always been perfect, going back to the 4-2 loss York suffered to Pacific in their first game in the 3-4-3.

In last weekend’s game against Atlético Ottawa, the back three had some unfortunate moments, giving away two penalties, but it continues to be a work in progress. In York’s 1-0 win over Cavalry FC just over a week ago, the exact same back three (and wingbacks) that they deployed in Halifax was excellent.

On Monday against Halifax, the trio of Zator, Thompson, and Mourdoukoutas was once again very solid, both in and out of possession. The three of them finished with four, five, and nine clearances, respectively, and Mourdoukoutas won possession a team-high nine times. York was a little more direct in their forward movement in this game, and all three centre-backs’ passing accuracy numbers from this match are hurt by the clearances and long balls they played primarily in the second half when the Wanderers began to threaten.

Nash explained postmatch that he was, on the whole, very pleased with his back three in this contest, particularly the way they matched up one-on-one with each member of Halifax’s front three. He also was quick to point out, though, that Jordan Wilson and Noah Verhoeven were very important to the defensive effort as well, with their ability to win balls in midfield and cut out passing lanes.

“I thought they did really well,” Nash said of his defenders. “At times today they were 1v1; we knew it was going to be that way, but we felt we could deal with it, and they did a really good job. They have some good players to tie up. I thought our midfield helped them out, winning second balls, getting tight, they did a good job. I liked the way [the centre-backs] played, they’re three good players and they’ve done a good job as a back three in every game. Last game, to give the penalties away really hurt and maybe we’re a little bit sloppy at times, but the Cavalry game and today I thought they were fantastic.”

The young striker was exceptional in Halifax, scoring two well-taken goals but also helping feed his wingers and create space for teammates with intelligent movement in the box. De Rosario’s slip pass to Kevin Dos Santos ahead of York’s third goal was an excellent indicator of the chemistry that’s building in York’s attack.