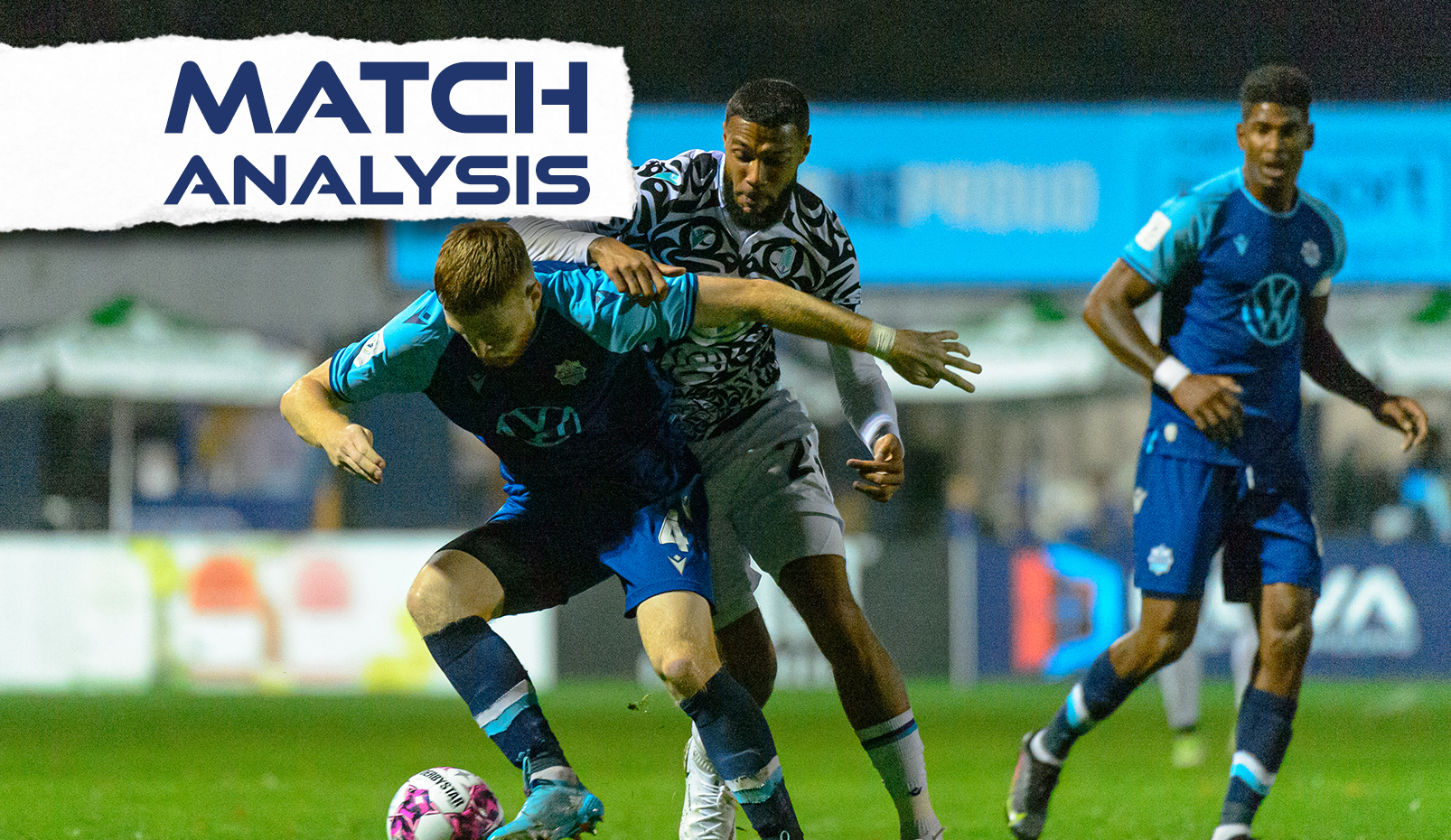 Pacific FC is back above the playoff line after a 2-0 victory over HFX Wanderers at Wanderers Grounds. The win ended a five-match winless streak for the Tridents and moved them into the fourth and final playoff position for the time being.

Djenairo Daniels opened the scoring just before the halftime whistle, while Josh Heard added a second, finishing off a brilliant team move in the second half.

Tuesday night’s match, originally scheduled for this past Saturday, was twice delayed due to the weather effects of Hurricane Fiona on Atlantic Canada.

The loss eliminated both Halifax Wanderers and York United from playoff contention, meaning Valour is the only side outside of the top four right now who could still make the postseason.

As Pacific FC goalscorer Josh Heard sat down to start his post-match press conference, the sounds of victory echoed through the media room at the Wanderers Grounds.

“I don’t know if you can hear that,” he said pointing over his shoulder, “but that is our team celebrating right now, and that is how much it means to us right now, it has been a long week.”

It has perhaps been a long few weeks for Pacific, who before Tuesday night had not won since August 13 in CPL action. They had slowly watched Valour climb above them during that time in the table as well, and had spent the last few weeks on the outside looking in to the CPL playoff race.

With Tuesday’s win, they are back into fourth place, three points up on Valour with a game in hand. The Winnipegers still have the goal difference advantage (+5 to Pacific’s +2) at the moment, but the Tridents are now much more secure than they have been in recent weeks.

Both Heard and Merriman awknowleged they were in a much better situation than many in the Atlantic provinces over the weekend, thanking their hotel staff for all they did to make the players feel comfortable and safe. Nevertheless, training and trying to prepare for a match that became unpredictable timing wise was very difficult. Putting in a performance like that after such a tricky week could go a long way towards galvanizing the group.

“I think it shows who we are, when our backs are against the wall and we have been it seems like dealing with a little bit of adversity throughout the season at different times, whether it is injuries, cards or travel,” said Pacific head coach James Merriman. “But we have a lot of character in the ground, and in our leadership group, and I thought guys stepped up, everybody did their job and I am happy for the players, they deserve it, they were completely committed to the match plan and to getting a result tonight.”

Pacific now has an incredibly quick turnaround as they take on FC Edmonton at Starlight Stadium on Friday. After that, things don’t get any easier as the Tridents face two of the most difficult road trips in the Canadian Premier League, away to Forge on Wednesday, October 5, before heading to Spruce Meadows to take on Cavalry in their season finale on October 8.

Given the numbers that follow, it should come as no surprise that Pacific’s first win in over a month coincided with the return of Manu Aparicio. When Aparicio has played at least a half of soccer this season for Pacific FC, they now have 28 points from 11 matches. When he does not, they have collected just 14 points from 14 matches.

In the second half, Aparicio showed why. After Pacific picked off the ball in their own half and started to move it in transition, the midfielder made an incredible off-ball run through the middle of the park to join the attack, eventually finding a pocket of space at the top left of Halifax’s box. He cut down the wing and sent a brilliant pass across to Heard at the back post.

“That is who he is, that is what he brings, that moment,” said Merriman with a smile after the match.

Overall, Aparicio had an assist and two chances created in attack, while winning back possession eight times on the defensive end.

“You see his energy, the ground he covered, of course he’s not going to come back and the rythym is going to be there straight away,” said Merriman. “It is going to take a match, a couple matches for him to find that ryhtym again. But I think you see the energy that he brings to our group at different times when we need to press defensively, or when we need to attack and we need a little more urgency on the ball going forward, that is what he provides. He can change games for us.”

Here is Aparicio’s heatmap from the match, showing just how much of the pitch he covered over the course of his first 90 minutes for Pacific since the last time they were in Halifax on August 20.

And then there were five; Halifax/York United eliminated from playoff contention

The Canadian Premier League playoff race officially lost two more teams on Tuesday night as both York United and Halifax joined FC Edmonton as sides eliminated from playoff contention. Just five teams remain in the battle for four spots, as Valour are the only side outside of that top four that can still make the postseason.

After the match, Halifax were left to eulogize not only a match but a season that had gotten away from them.

“We have been saying it all season, we did have a couple of bad games, but really and truly most of the time we were in the games, we were creating chances, we just weren’t scoring chances,” said Halifax manager Stephen Hart. “It is very similar to today, we had I think two good chances, and we didn’t score and put them under pressure.”

No team underperformed their expected goals more in the CPL this season than Halifax, who finished with 31.33, but have only scored 23 goals to date, only 13 of which have come from open play.

Another issue for Halifax all year has been an inability to build on good results. They haven’t been able to win back-to-back games all season.

“Overall, throughout the season, not enough consistency, we have had our good moments but we have let ourselves down far too many times this year,” said HFX midfielder Mohammed Omar. “If you want to make it deep into the season, and make it into the playoffs we just needed to find a bit more form at different parts of the season and unfortunately we weren’t able to to do that. As of late we were making a push but, unfortunately we weren’t able to make up lost ground and that is something we need to learn from.”

Aside from the playoff elimination, Halifax were dealt another tough blow in the 27th minute when captain Andre Rampersad had to be removed from the match after taking a knock to the head. Hart says he is still being assessed, and they will know more about his situation tomorrow. Rampersad is two matches away from playing 100 for the Wanderers.

One aspect of Halifax’s season worth highlighting and celebrating once again this year, however, has been their incessant fan support. Despite the recent natural disaster that left many of them without power or worse, and still ugly weather at Wanderers Grounds, a great crowd turned out again on Tuesday night in the provincial capital.

“As we all know it was a tough week for many of the Atlantic Canada provinces as a whole, Nova Scotia included,” said Omar. “To see our fans still come out and support us, I think that is what I want to take away from today is just letting our fans know how grateful and appreciative we are that they would be able to still come out. support us from the first minute to the 90th minute and be there with us every step of the way.”

All of Pacific’s best chances, as well as their goals in the match, involved the inventive dos Santos. He won five fouls, including on some good areas, played passes in the buildup to both Pacific goals, and won possession back six times including twice in the final third during an overall terrific effort.