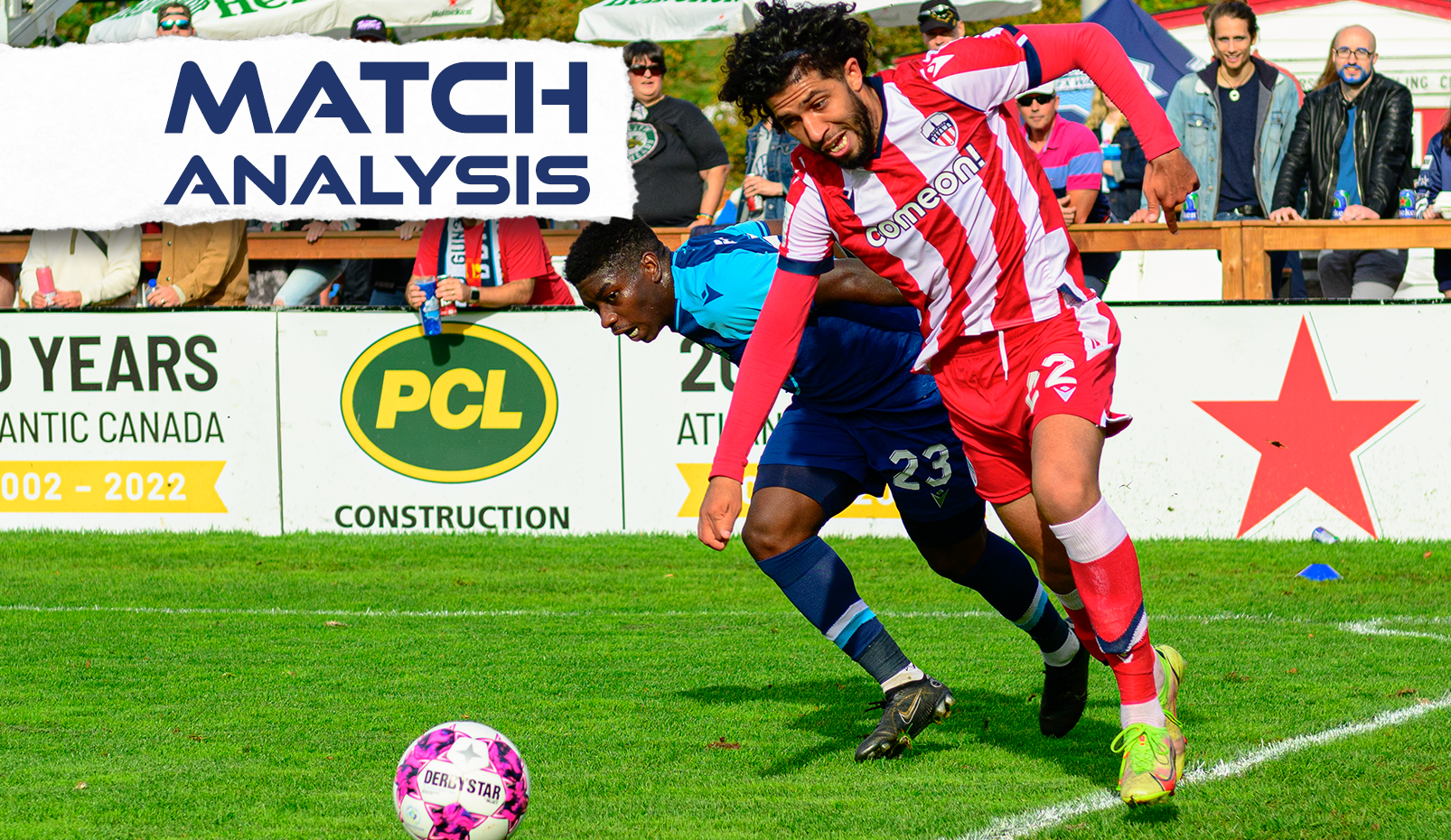 Atlético Ottawa is now a win away from clinching the Canadian Premier League’s regular season title after defeating Halifax Wanderers 2-1 on Saturday at Wanderers Grounds.

It was Atleti’s eighth straight match without a loss, extending back to mid-August, as they continue to roll heading into their first-ever postseason appearance. Max Tissot opened the scoring from an excellent free kick, while Zakaria Bahous’s first professional goal would stand as the winner. Samuel Salter had the consolation goal for Halifax, who came close to finding an equalizer in the late going only to be denied by some brilliant saves from Nate Ingham.

The loss was Halifax’s sixth at home this season, tying FC Edmonton and York United for the league-worst in that category. Coming into this year, Halifax had lost just four matches at Wanderers’ Grounds.

Atlético Ottawa concluded the road portion of their 2022 regular season schedule in a historic fashion on Saturday. With the 2-1 victory, they picked up their 28th road point of the season, a league record, while also tying the league record for most road wins in a season, with their eighth. Both records were previously held by Cavalry FC, who achieved 27 points and 8 road wins in both the 2019 and 2021 seasons.

Ottawa only lost twice on the road during the 2022 season. Today’s match was yet another example of them being able to dig in and hold on to a favourable result despite being out-possessed (only holding 41.7 per cent of the ball) and out-chanced (1.08 to 0.7 xG) over the course of 90 minutes.

“We are having moments in which we are suffering, or maybe we are not in our best version, but still the team is competing so so well, and we are able to continue winning the three points,” said Atlético Ottawa head coach Carlos González. “I think that the season that the guys are doing, that the team is doing, is remarkable. I am very proud of the competitiveness that we have created and the mentality that all the players have. They show every single game, every single action that they are ambitious and that they are still hungry.”

Wanderers manager Stephen Hart pointed to the experience that Atlético Ottawa has added to their lineup this season as central to this success.

“They brought in not only some quality players but they brought in a lot of experience and it showed,” said Hart. “It showed how they tried to manage the game and when they recognized that they were under pressure, they were on the back foot for the last ten minutes of the game they did their best to kill off the game. That is experience for you, they did it very well.”

Veteran goalkeeper Nate Ingham was an excellent example of that. Not only did he make some brilliant saves late in the match but was also key to slowing down the match and killing time when possible.

Coming into this match, Atleti knew they were in for a challenge. The side, who have made a name for themselves by being compact and incredibly difficult to break down know a kindred spirit when they see one, and Halifax has found success with a similar style in recent weeks. The Wanderers had kept four clean sheets in their last five home matches heading into today.

This has largely been thanks to a shift to a back five, which makes them incredibly difficult to beat in transition, and arguably even more difficult to break down once they are set in position.

One of the key ways Ottawa chose to combat this bank of five today was to overload the flanks in attacking positions, allowing their wide players to operate close together and create triangles. In particular, they looked to build attacks down the right side where key playmaker Ollie Bassett combined well with Miguel Acosta and Zachary Roy. A total of 50.7 per cent of their forward forays during the match came down the right.

The trio combined to win three free kicks in a similar position at the top right of the Halifax box. On the third one, Max Tissot opened the scoring in brilliant fashion. Atléti’s second goal also came down the right, as Acosta’s brilliant cross found Bahous in the middle of the box.

“During the week we worked on situations on the flanks of how to attack them and how to break them through the flanks because we know that they are a strong team in the inside,” said González. “So during the season, we have tried to create these synergies between players so that they know each other and don’t even need to look at each other to know what they want. I am very happy about how we went over there and we created situations, and although we didn’t create that much, I think that we were very sharp in the last meters.”

All year long, Bahous has been an incredibly important player for Atlético Ottawa. In part, this is because of his age and nationality. The 21-year-old Longueuil, Quebec native qualifies for U-21 domestic minutes and has done the heavy lifting for Ottawa in this critical area this season, with 1,346 minutes played this year.

Today, however, was certainly an example of just how much quality the player has brought Ottawa during those minutes this season. Aside from scoring his first professional goal, which stood as the match winner, he was also excellent in winning the ball back for his side in important areas. He won possession nine times during the match, and had two interceptions.

“Very happy for him, it has been coming he had a couple of good chances,” said Tissot of his teammate after the match. “He had [a good chance] against Cavalry last game at the end of the game, so just very happy for him, his first professional goal. All the boys are really happy, he has been good for us, playing at various positions this year, and he has done well when called upon.”

Zakaria Bahous makes it 2-0 for @atletiOttawa with a tidy finish 🔴#CanPL | 📺 @onesoccerpic.twitter.com/zPYuoD6T1o

“Zak’s progression has been great since the beginning, we found him as a kid and now he’s a man you know,” said González. “He has grown so much in the last few months. We knew that this was a process and we knew that we needed to take time so that they could reach the level that we were trying to approach.”

Ottawa’s lack of U-21 minutes has at times been a concern this year, especially since for most of the year they haven’t had many players on the roster who were eligible to meet the threshold. Today, however, they took a bit step toward reaching the required 2,000 minutes that each club must achieve.

“This was one of the targets of today’s game,” said González, “first of all bring the three points to Ottawa, and the second was to do a good amount of U-21 minutes so that we are near to clinching the 2000 minutes.”

Between Bahous, Roy and Owen Antoniuk, Ottawa clocked 194 U-21 domestic minutes against Halifax, bringing them to 1,974 on the season. They will need an additional 26 minutes in their final match of the season at home against York United in order to be eligible for the 2022 playoffs.

His first professional goal was the reward for an exceptional all-round performance from Bahous. He also made 13 passes into the final third, won possession nine times and had two interceptions during the match.