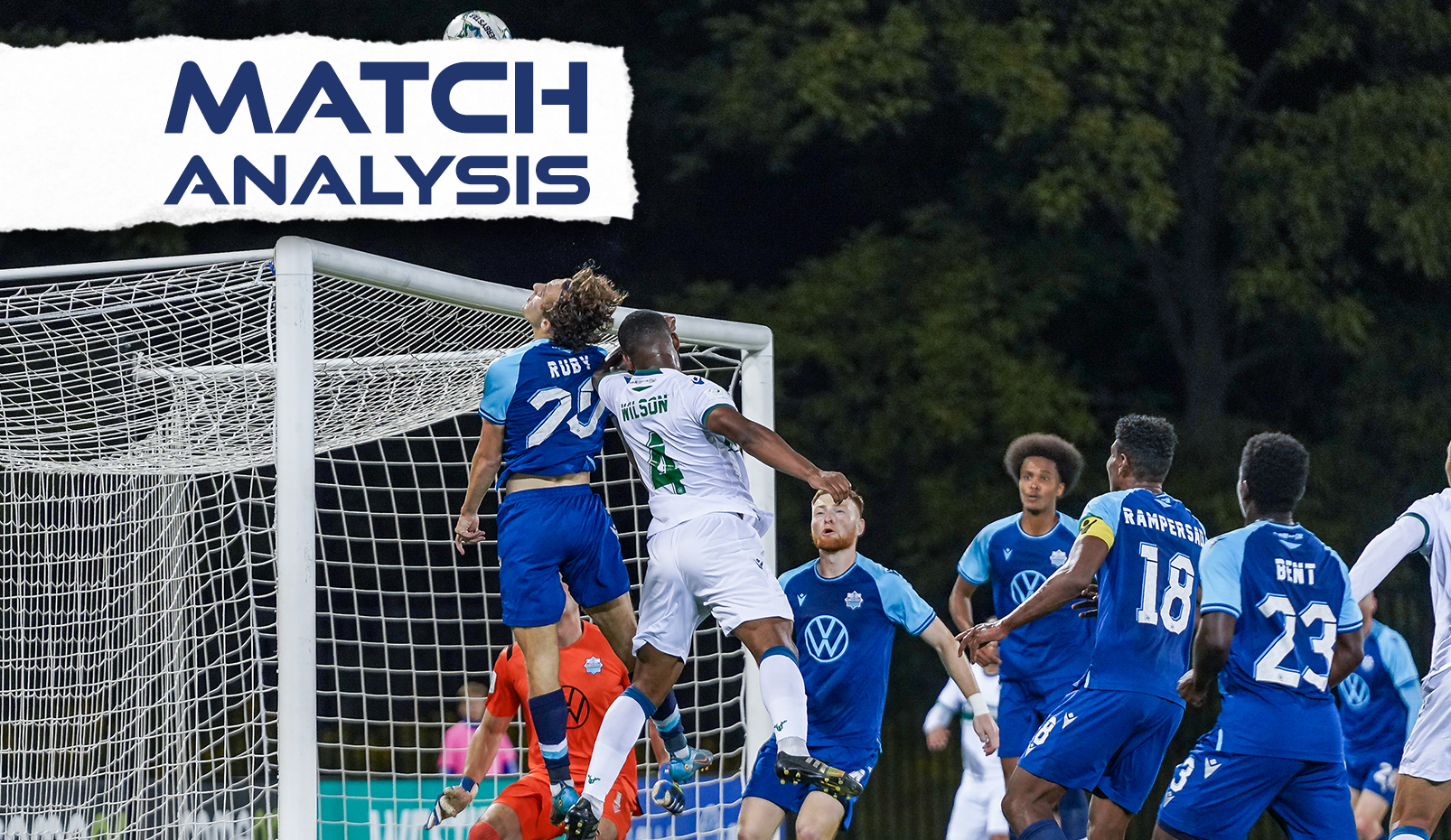 It was a match that based on its importance really should have been a must-watch affair. Instead, both York United and HFX Wanderers settled for a scoreless draw that saw limited chances and did serious damage to both teams’ fleeting playoff hopes.

The match largely lacked the intensity usually associated with do-or-die situations. York United keeper Eleais Himaras was full value for his clean sheet, making three excellent saves. Keiran Baskett of HFX, meanwhile, only faced one shot on target over the course of 90 minutes.

The draw means that York will be alive for another matchweek. For Halifax, however, a win or draw for Cavalry this weekend coupled with a win for either Valour or Pacific, or if both those sides win this weekend would mean elimination from playoff contention.

The odds either York United or HFX Wanderers would appear in the 2022 Canadian Premier League playoffs were already fairly slim going into this weekend. Picking up a single point, then, didn’t really benefit either side as they are now both on the brink of elimination from playoff contention.

While Stephen Hart says his side still intends on trying to pick up nine points from their final three matches, he knows this was probably the end of the road for his side’s playoff hopes.

Especially in the first half, Halifax had some real chances to open the scoring, something they were looking to do early to put even more pressure on York United. Fumpa Mwandwe, in particular, had several solid scoring chances but was unable to convert.

“I thought we had a very good first half, we played well, we created some chances,” said Hart. “In the second half, we defended a little bit more than I would like, but the game was very stop and go, a lot of free kicks from outside and I sure it wasn’t the best to watch, but we defended well and unfortunately we couldn’t sneak a goal somewhere.”

While York mostly did a good job defending in transition, Halifax still managed to create two big chances to their zero, and had the better of the expected goals 0.70 to 0.64.

While only a loss would have put York at risk of being mathematically eliminated from playoff contention, they knew they probably had to win all four of their final matches to even have a chance. Nonetheless, they too intend on making the most of the rest of their schedule.

While they are unlikely to qualify themselves, both sides still have plenty of opportunity to “make things interesting” down the stretch. York’s final home match of the season comes next weekend, as they take on playoff hopeful Valour FC, before road trips to take on the league’s current top two sides, Forge FC and Atlético Ottawa.

Halifax, meanwhile, will host fifth-place Pacific next weekend, before they play Atlético Ottawa (at home) and Forge FC away on the final day of the season.

York United’s attack goes missing when they needed it most

York United came into this match as the league’s hottest offensive team but facing an organized Halifax backline were unable to live up to their recent standard.

York consistently got into good areas over the course of 90 minutes, with 71 final third entries and 18 touches in the Halifax box. But they were not able to turn that into more than a single shot on Baskett.

Perhaps a good indication of this area vs. execution dichotomy was their crossing during the match. York consistently got the ball into good crossing positions, but ultimately only four of their 28 attempts during the match found the intended target.

Especially disappointing was their first half, where they managed just 0.12 expected goals and just a single shot attempt inside the Halifax box despite seven touches in the area.

“I think it was just the tempo we played at was too slow and it allowed them to stay in front of us,” said York United coach Martin Nash after the match. “We talked about it at half-time, we needed to try to get behind them more and when we did we caused them problems. We created a few half chances, maybe a little bit unlucky that nothing fell our way on a few half chances but we didn’t cut them open and it was largely down to not moving the ball quick enough.”

Not having leading goalscorer Osaze De Rosario, who missed the match due to suspension, in the lineup certainly hurt the Nine Stripes. But they still should have been able to do a lot more with the possession and territorial advantage that they had during the match.

“We were putting a lot of pressure on them, we just needed to be a little bit more fortunate getting on to the end of like a set piece or something like that,” said Zator. “We were creating some scrappy chances in the box and unfortunately nothing dropped to us, so yeah, just taking one point out of the game doesn’t feel like it is enough.”

It was a third straight clean sheet for HFX Wanderers, who late in the season are starting to once again build a reputation for being an incredibly difficult side to break down. For a side that now looks to be building with an eye towards next year, the good news is that this has come with an incredibly young defensive core of late.

On Friday, the club spent the majority of the match playing against the league’s hottest attack with a back five and goalkeeper with an average age of just 21.8.

One of the big focuses in this match for Halifax defensively was keying in on some of the difference makers in York United’s recent run. As aforementioned, they were a bit fortunate not to come up against De Rosario but showed well against York’s other weapons.

“I thought collectively the back line worked well, but in general the club was solid. We didn’t give up much space for [Mo] Babouli to operate in, and we tried to limit the amount of crosses from Chrisnovic [N’sa]’s side in particular because he can cross with both feet and in general we did quite well.”

They did both excellently, in fact below is a look at N’sa crossing actions from the game. He was only able to make three over the course of 90 minutes, a huge credit to some collaborative work between Cristian Campagna, Jérémy Gagnon-Laparé and Obeng Tabi on that side.

“As a defender I pride myself on getting clean sheets,” said Ruby postgame,” and being strong at the back and our backline and our forwards we pressed really well today and kept [York] in front of us and made sure not for them to play overtop and I think we did a good job of that today.”

Adding to how impressive the performance was the adaptability of the defence to constant and unexpected change. The backline’s minutes leader this season, Zach Fernandez, missed the match through suspension. Then, Hart was forced to make some in-game adjustments for which he wasn’t planning.

“It was a little difficult because I had two unplanned substitutions,” he said, “and once that happens you know you have to change the way you approach the game somewhat, and we had to shuffle the backline twice basically. But they did well.”

The 22-year-old defender has been outstanding of late as part of the Halifax back three. Against York, he won nine of 11 duels, won possession eight times, made five tackles and had six clearances to help Halifax keep a third straight clean sheet.

York continues their homestand as they welcome Valour in what will be another intense affair with a lot on the line in the league’s playoff race on Friday, September 23rd (7:30 p.m. ET). Wanderers, meanwhile, is back at home, where they have been excellent of late, to take on Pacific FC on Saturday, September 24 (2:30 p.m. ET /3:30 p.m. AT).