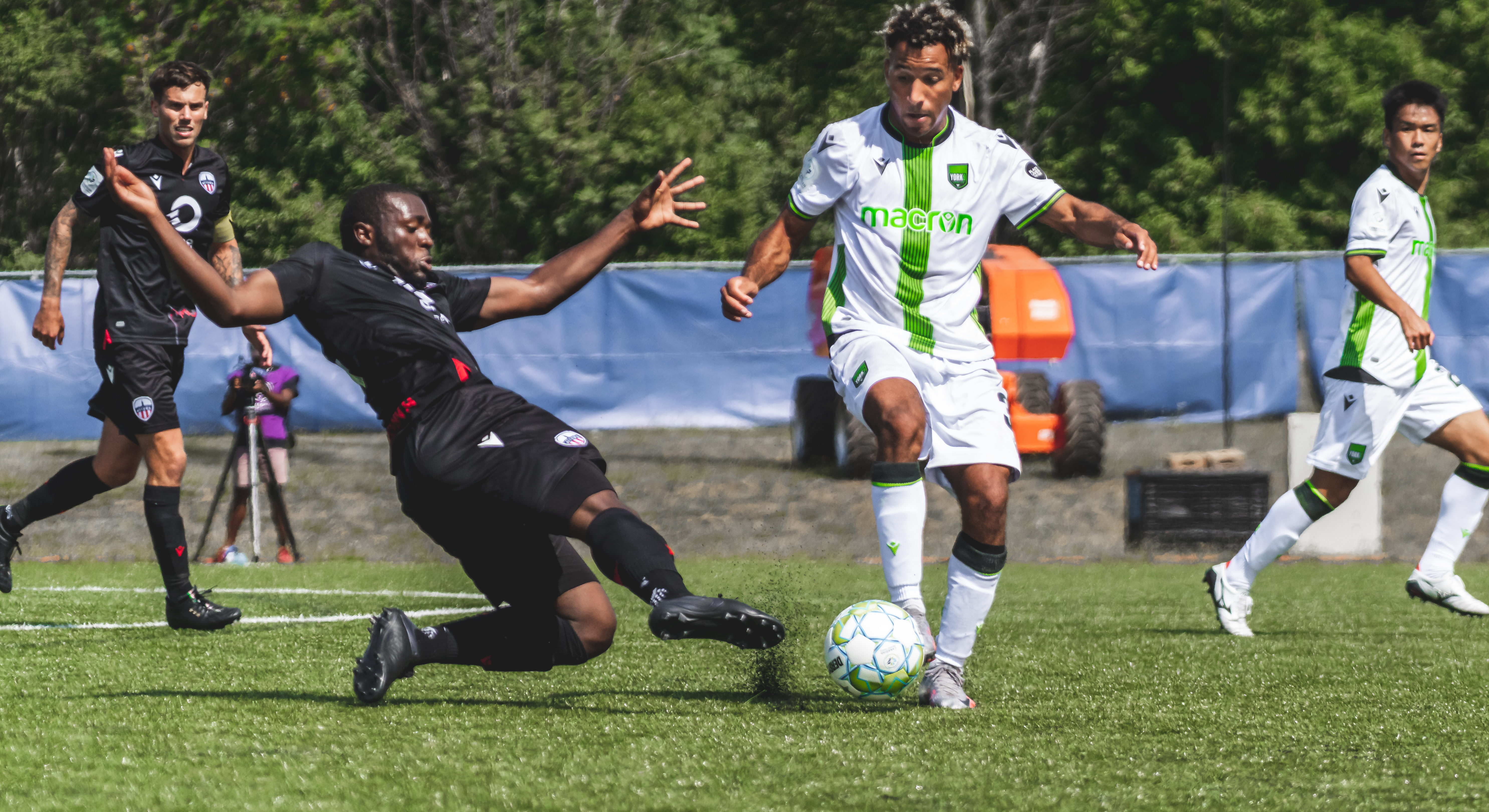 Morey Doner in action at The Island Games. (CPL/Chant Photography)
Morey Doner on move to HFX Wanderers: ‘It was the best career move for me’
January 8, 2021
Canadian Premier League
by
Marty Thompson, CanPL.ca

Morey Doner was a free agent for less than one business day.

The 26-year-old’s departure from York9 FC, now York United, turned heads across the Canadian Premier League in November. Released quietly on a weekend, Doner left York after signing an extension and playing all 630 minutes of the club’s seven-game run at The Island Games.

Cut to a Monday morning when HFX Wanderers FC coach Stephen Hart, presumably getting caught up on CPL news from the weekend, jumped on the phone with Doner to try to work out a deal.

The Wanderers announced the signing of the fullback this week, confirming Doner has joined on a one-year deal with an option for 2022.

“(That) Monday morning I got a text and asked if I was available,” Doner told CanPL.ca while quarantining in Halifax. “Coming to the Wanderers was always in the back of my mind, to be honest.”

Hart and Doner have a bit of history. There was mutual interest in early 2018, before Doner went to York, and before the CPL was born, which paved the way for his move to Halifax in 2021.

RELATED READING: CPL off-season roster tracker: Who’s in and who’s out for 2021?

“We chatted, before the CPL came to fruition, about linking up in Halifax,” Doner revealed. “I know they have a great project – and they were one of the best teams in the CPL last year. So, I think it was a perfect fit for me and it’s a good career move.

The Collingwood, Ont., native made a name for himself in the CPL in a breakout inaugural campaign, earning plaudits as one of the league’s top right fullbacks. Doner made 32 appearances for York across the 2019 and 2020 seasons, forming a formidable fullback combination with Diyaeddine Abzi.

Doner is looking to compliment a Wanderers side that reached the CPL Finals in 2020 after finishing in last place the year before.

“I think it shows what kind of coach Stephen is. I don’t think he had the players he necessarily wanted in the first year. Now you can see how good of a coach he really is with the pieces that he wants going forward,” Doner said.

“I wasn’t expecting a call so soon from Stephen and I’m happy because if there was one CPL team I’d want to go to, it’s Halifax.”

Doner’s move to Halifax completes a fullback swap between York and the Wanderers. Chrisnovic N’sa, a two-year Wanderer who was nominated for Best Under-21 Player of the Year in 2020, signed with York last Fall. Doner is a direct replacement for N’sa and could compete for playing time with Mateo Restrepo, though the latter can also play on the left side.

While Doner’s departure was surprising, especially considering his status as a fan favourite, the exodus from York was not. Several big-name players departed the club this off-season, including Joseph Di Chiara (Cavalry FC), Manuel Aparicio (Pacific FC), and Kyle Porter (FC Edmonton).

Doner insists there are no hard feelings between him and the Nine Stripes, citing a difficult Island Games as a catalyst for moving on.

“My motivation was, well, we underperformed – including myself, I wasn’t playing at the best of my ability,” Doner admitted. “When pieces started to move this off-season and players started to think about going somewhere else, I felt it was the right move for me too. To be honest, I was trying to get to Europe.

“It’s business – being in the best position to be successful is most important. They’re going through a rebuild right now and going a different route with younger players.”

Doner stands as Halifax’s first new addition to their 2021 squad, which already features a dozen players from The Island Games squad that made the CPL Final last season.

At 26, and coming into his prime as a footballer, Doner has come to Halifax to win.

“With my career, age, and experience I thought it was worth it but COVID-19 obviously got in the way,” Doner said.

“Being in Halifax is the best place to win and they had great pieces, a great coach, and I think I can add some experience and expertise to that.

“I think it was the best career move for me.”