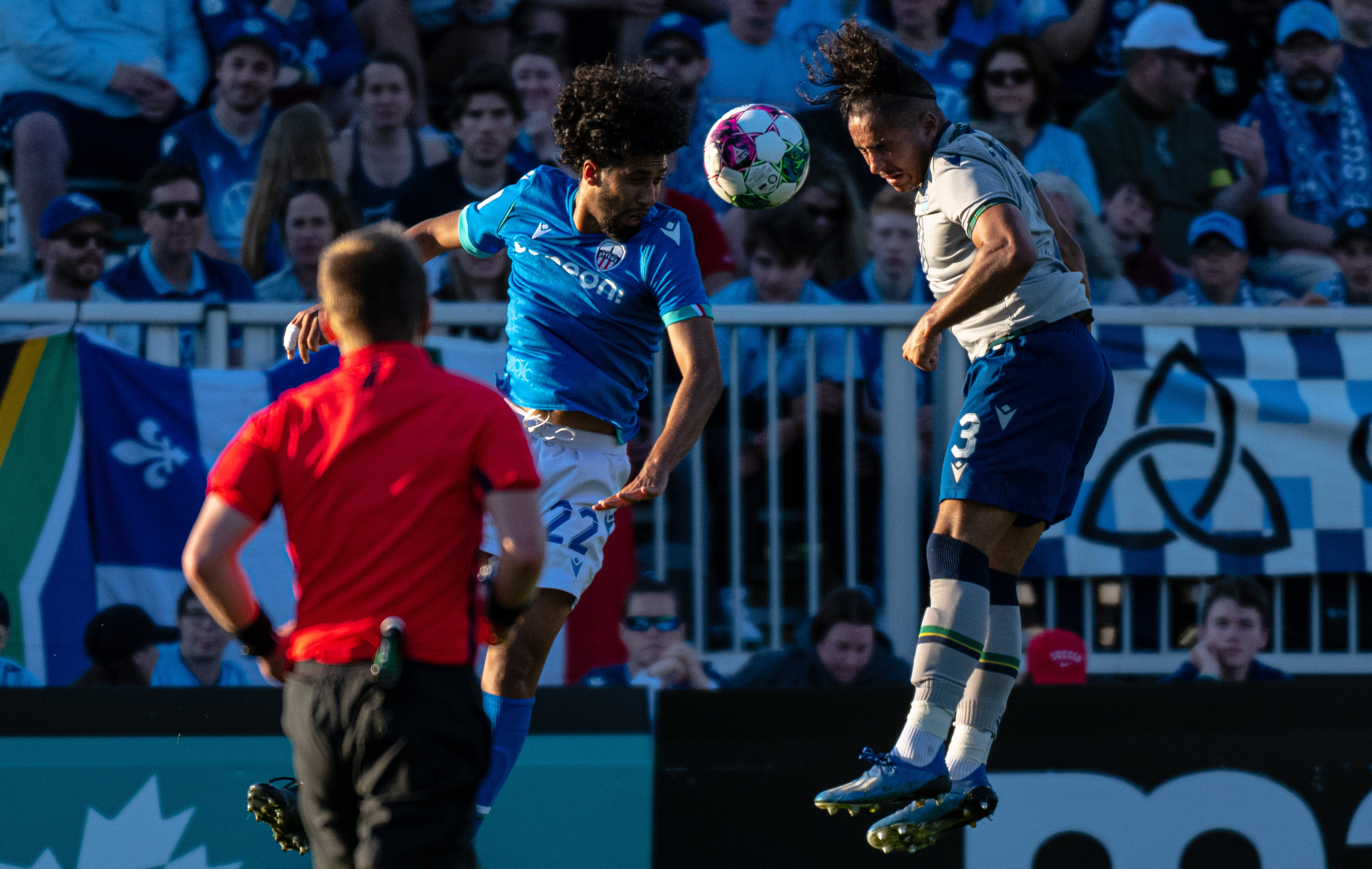 Atlético Ottawa was back in the points and the goals tonight, picking up a big 2-0 win over 10-man HFX Wanderers. It was the club’s first-ever win in Halifax.

After Samuel Salter was sent off in the 69th minute, Ollie Bassett scored on the ensuing free-kick. Miguel Acosta then doubled the lead late in the match. Nathan Ingham, meanwhile, picked up his fifth clean sheet which is tied for the league lead.

Ottawa had the first real chance of the match in the tenth minute as Zakaria Bahous opened up some space for himself with some great footwork down the left flank. His low-driven shot, however, was blocked before it could trouble Christian Oxner.

Salter, who came into the match tied for second in the league’s golden boot race with five goals, replied to that chance quickly with one of his own, redirecting a cross from Zachary Fernandez just wide of the Ottawa net.

Both sides quickly found their defensive shape after that, however, and chances were few and far between, mostly limited to inconsequential long-range efforts for most of the half. Ottawa had a pair of chances in quick succession in the 34th minute, but both were blocked well by Halifax defenders.

After mostly ceding possession in the early part of the match, the visitors were finally able to get on the ball towards the end of the first half.

Perhaps the best chance of the half was orchestrated by Ballou Tabla in the dying moments of the half as he beat his man down the wing and whipped a pair of balls into the box. Neither of them was truly able to connect, however, as Malcolm Shaw’s attempt went harmlessly wide from close range. The otherwise rather uneventful half ended 0-0.

Once again, the Wanderers had the first big chance of the second half as a free-kick from Jérémy Gagnon-Laparé was redirected just wide by Peter Schaale.

Shortly thereafter, Max Tissot found Tabla in the middle who poked the ball away from Oxner. Shaw’s follow-up attempt, however, was well blocked by Eriks Santos.

On the ensuing corner kick, the game got stretched as first Fernandez broke the other way, showing his incredible speed before being caught by Ottawa defenders. The ball fell to Miguel Acosta, who played a brilliant ball behind the backline to Tabla. The Ottawa attacker again couldn’t capitalize, however.

Halifax then nearly caught Ottawa off guard in the 60th minute, as Schaale’s ball found the head of Fernandez behind the Ottawa line. In a play very reminiscent of a goal they scored against FC Edmonton earlier in the season, he directed it into the path of Salter but this time the young striker couldn’t find a finish.

In the 69th minute, however, Salter was on the wrong end of a challenge with Tabla, and having already received a yellow card earlier in the half, was sent off. On the ensuing free kick, Bassett’s delivery fooled everyone, including Oxner, and beat the keeper through his legs to give the visitors a 1-0 lead.

The hosts fought to get back into the game, however, and had a few decent chances shortly after the goal, the best of which came from a long-distance effort from Aidan Daniels that forced a good save out of Nathan Ingham.

Ingham was forced to make an even better save moments later as Akeem Garcia found himself alone in the box and nearly looped a tricky header over the Ottawa keeper. Garcia was part of a triple sub that Hart made in the 79th minute looking to get his side back in the game that also included Cory Bent and Marcello Polisi.

Acosta then put the match to bed in the 88th minute, with a brilliant run down the right flank before firing the ball low past Oxner to give the visitors a 2-0 lead. It was the fullback’s first goal of the season.

Garcia looked to have found a late goal for the visitors, but it was deemed to be offside as Ottawa played their offside trap well.

The win puts Ottawa up into second place in the table for the time being, just two points behind Cavalry at the top of the CPL table.