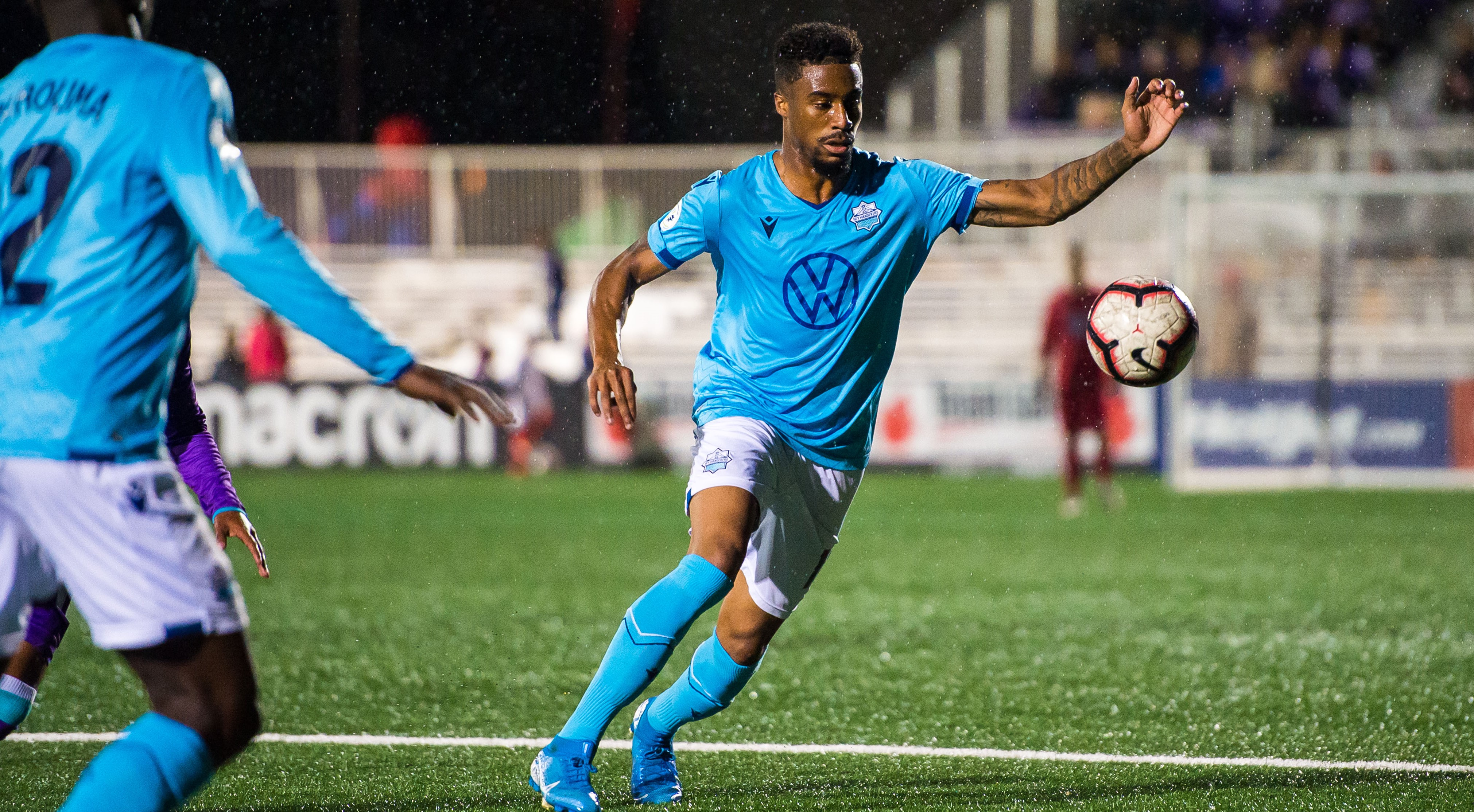 Duran Lee dictating the play out of the back three the Wanderers started against Pacific with. Photo: Pacific FC.
Wanderers coach credits players ‘spirit’ ahead of Cavalry contest
October 4, 2019
by
Gareth Hampshire
Latest

After coming from behind to take a point on the road at Pacific, Stephen Hart is looking for his team to show the same kind of character against Cavalry on Saturday.

Hart’s team are proving difficult to beat in the CPL’s fall season after putting together an unbeaten run of six matches dating back to September 2nd.

“We know Cavalry will be upbeat after another big win but I credit the way we fought in Pacific and we could have even won it so we have to keep that kind of spirit going,” Hart said.

Leading scorer Akeem Garcia sealed a point for the Wanderers with an instinctive striker’s finish in the 80th minute for his seventh CPL goal.

Tomasz Skublak had a golden chance to snatch a win moments later but saw his shot rebound off the goalkeeper’s face from close range.

There were a number of other notable individual efforts from Hart’s team with Christian Oxner again in commanding form in goal.

In front of him, Hart started with a central defensive back three, allowing the wing-backs to attack with more freedom down the flanks.

“We have good players to play that back three because Zoom Langwa and André Bona have speed on the sides so I think it’s something to try again,” said Chrisnovic N’sa, who was a part of the three.

The young defender said the vibe in the Wanderers camp is good in Alberta after coming from behind in B.C.

The players are now keen to test themselves in an even bigger challenge.

“Cavalry have been setting the standard, they’re all disciplined and they fight for each other, so we will need to keep our intensity,” said Duran Lee.

The centre-back said the team is gaining confidence from a stretch without losing, but is keen to turn draws into wins after six consecutive ties during that run.

Being the underdog in Cavalry is an added motivation according to Lee.

Tommy Wheeldon Jr’s team — who will compete in the Canadian Premier League Finals against Forge — hit four goals on their way to a win against Valour, Wednesday night.

“We know a lot of people will doubt us but we go into it just like we went into Forge when we were in Hamilton and played well,” Lee said.

You can follow the Wanderers against Cavalry at Spruce Meadows live on One Soccer.

The match kicks off at 7 p.m. ADT. Saturday, so it’s an ideal night to get out to one of our partner pubs who will be streaming the game.

Athens, Auction House, Durty Nelly’s, Freemans (Downtown, Quinpool, Fairview, Sackville), Hali-Mac Axe Throwing, Niche Lounge and The Pint, will all be showing the match, where you’ll be able to watch with other Wanderers fans.