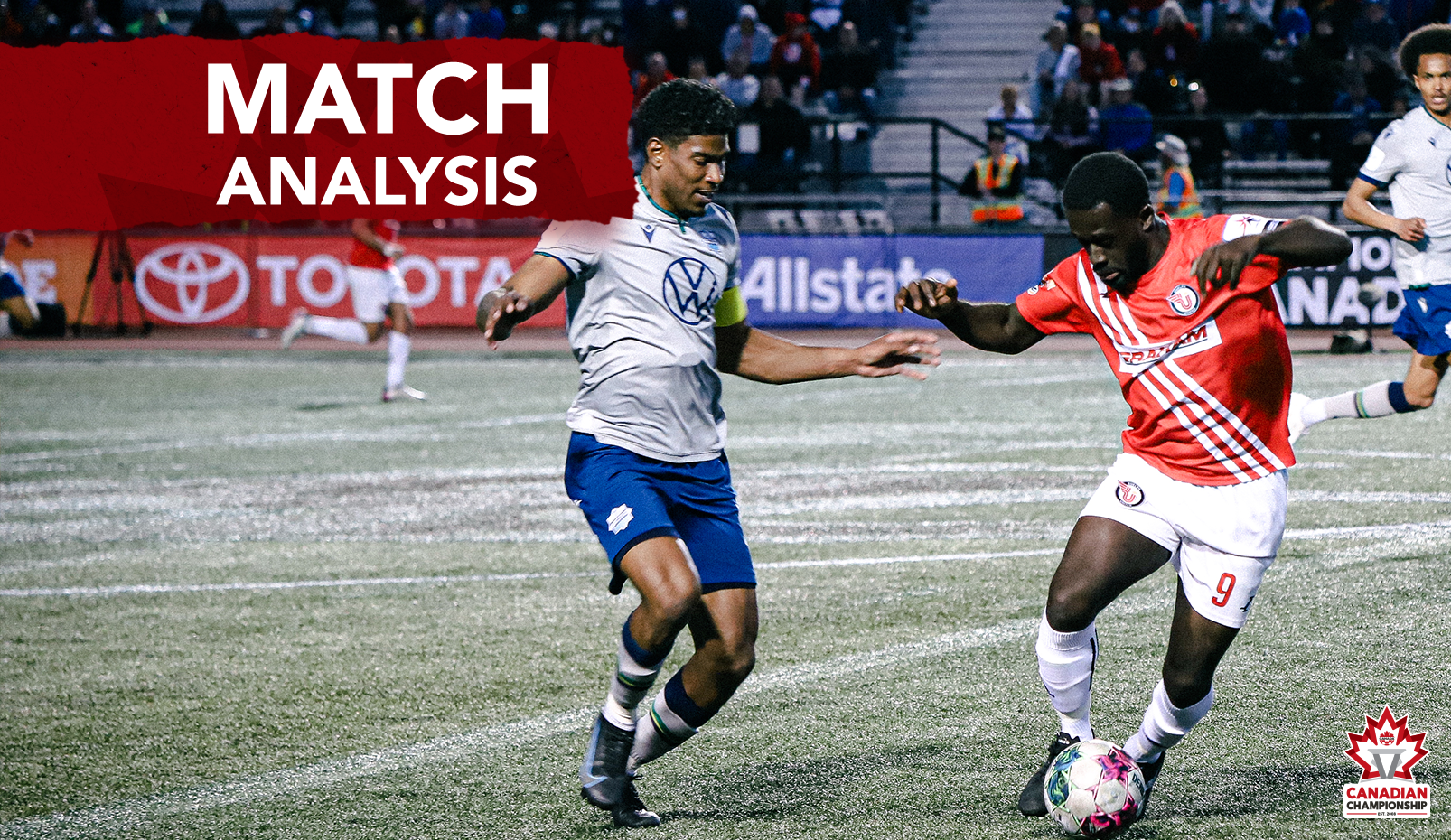 HFX Wanderers FC took a step closer to the Voyageurs’ Cup on Tuesday, booking their ticket to the Canadian Championship quarterfinals with a 2-0 win over League1 Ontario outfit Guelph United. Akeem Garcia got the CPL team on the board first with a penalty kick just over 20 minutes in, and Aidan Daniels doubled their lead at the hour mark with a screamer from outside the box to cap off a deceptive set-piece routine.

Although Guelph defended well and managed to get the ball upfield a few times, they ultimately couldn’t quite find the breakthrough they wanted and the match ended a two-goal decision. The Wanderers, therefore, will move on to the last eight, where they will take on MLS outfit Toronto FC.

The driving force behind the CPL side’s possession dominance on Tuesday was the way they commanded the centre of the park. With the trio of Andre Rampersad, Aidan Daniels, and Pierre Lamothe all playing primarily in the central channels, they were able to utterly dominate that part of the pitch and break up almost all of Guelph’s attempts to play directly through the middle. All three players were in the double figures for duels as they each looked to step up on players trying vainly to dribble into midfield.

Halifax seemed to establish a pattern of Rampersad winning the ball (he did so 10 times) and pushing it toward Daniels or Lamothe, both of whom would drive forward before trying to feed it to wingers Sam Salter or Cory Bent.

Below are heatmaps for the Wanderers’ midfield three of Rampersad, Daniels, and Lamothe (top) and Guelph’s trio of Lucas Doros, Evan Dick, and Jack Sears:

With 52.5% of the entire match played within that middle third, it was essential for Halifax to establish control early and ensure Guelph couldn’t find any easy paths through that area.

“Early on in preseason, the coaches implemented a plan for the midfield — how we press, second balls, and stuff like that,” Daniels said postgame. “I think whoever’s in the midfield three throughout the season knows the job, it’s really just knowing our roles and sticking to it. I think our game plan worked; obviously we had some mishaps but our backline covered for us and at that point, it’s just recovering and getting back.”

As has been the case in other games recently (like last weekend’s 0-0 draw with Valour), the Wanderers will likely leave this fixture feeling like they should have scored more. Certainly, 22 shots and 10 on target would suggest as much, as would the fact they generated just under 2.5 non-penalty expected goals.

The CPL team was excellent at driving the ball into the attacking third (83 entries) and the opposing penalty area (42 touches in the box) — but it was the final piece of quality that they still can’t find as consistently as they’d like. Aidan Daniels, of course, found the net with a supreme piece of quality, but the Wanderers saw far more of their chances send over the bar or beyond the posts.

Cory Bent in particular had an outstanding game in all areas except finishing; the winger had five shots of his own and created five chances, doing well to run at defenders and create space for teammates, but the ball did fall to him for a few opportunities he likely should have scored — including the shot he put off the post seconds before the foul leading to Halifax’s penalty. Samuel Salter, similarly, had five shots, but again he was unable to put one in the net.

That said, special credit must be given to Guelph goalkeeper Svyatik Artemenko. The 22-year-old, making his first start for the club since returning from serving in the Ukrainian army the past few months, was outstanding between the posts. He was officially credited with eight saves, though he did well on a few other chances to claim crosses and passes before they became dangerous. Artemenko even chose the right way to dive for Garcia’s penalty, though the well-placed shot still snuck under his glove.

“He’s an amazing leader for us. We all know what he’s just been through and what he’s done, and we just love him,” Guelph coach Keith Mason said of his goalkeeper postmatch. “It was a tough game for him, that’s his first start, and everybody knows his history over the last few months. We’re working him back slowly; that was one of the toughest calls we had in terms of, do we throw him in a big game? He’s a guy that has been there and done it for us, so we went for it and he pulled off some big saves for us. It’s great to have him back between the posts and he’s just gonna grow from this.”

Even before the match, Guelph’s players and staff knew it would take a gargantuan effort — and a healthy dose of fortune — to overcome the CPL opposition. In the end, it wasn’t to be for the League1 Ontario side on Tuesday, but that doesn’t mean they can’t hold their heads high after representing their league admirably.

Guelph, expecting a physical encounter against the professional opponent, were up to the task when it came to fighting for the ball. The duels won were almost exactly even when all was said and done, although in the first half — before the wind came out of Guelph’s sails with the second goal — the League1 side actually had the upper hand, winning 55% in the opening 45 minutes. They made 26 tackles to the Wanderers’ 17 (partly a product of Halifax dominating possession), and the typically held their own in any shoulder-to-shoulder battles.

Some of the finer details did offer evidence of the Wanderers’ higher level, of course; the CPL side were a little faster to second balls (which drew the penalty in the first half) and quicker to move it onward, allowing them to play through Guelph’s lines, but in one-on-one situations the hosts generally matched up well.

“I’m very proud of the boys’ efforts,” Guelph coach Mason said postmatch. “They gave their all, I couldn’t really ask anymore. It’s a game where we’re playing a team in a division above, we definitely went in with hopes of causing an upset so it’s disappointing that we didn’t get too many shots on target, we didn’t really connect in the final third, but I can’t fault the guys’ efforts. It was there, they tried their best, and we were in the game for a long time at 1-0. Anything can happen, and we were certainly hoping we could snatch one, but it wasn’t to be today.”

Playing in front of a very strong crowd on the university campus in Guelph, the League1 side will definitely take important lessons and memories from the experience of going toe-to-toe with a pro side. Indeed, even Wanderers boss Stephen Hart had words of praise for his opponent postmatch, offering his congratulations for an admirable performance.

The skipper was, as usual, a force in midfield for the Wanderers, punishing Guelph repeatedly for sloppy passes. Rampersad won 11 out of 14 duels (including four of five aerial duels), he won possession 10 times, and he had a 91% pass success rate.

With the win, HFX now move on to the Canadian Championship quarterfinals, where they’ll host MLS outfit Toronto FC at the Wanderers Grounds two weeks from now.