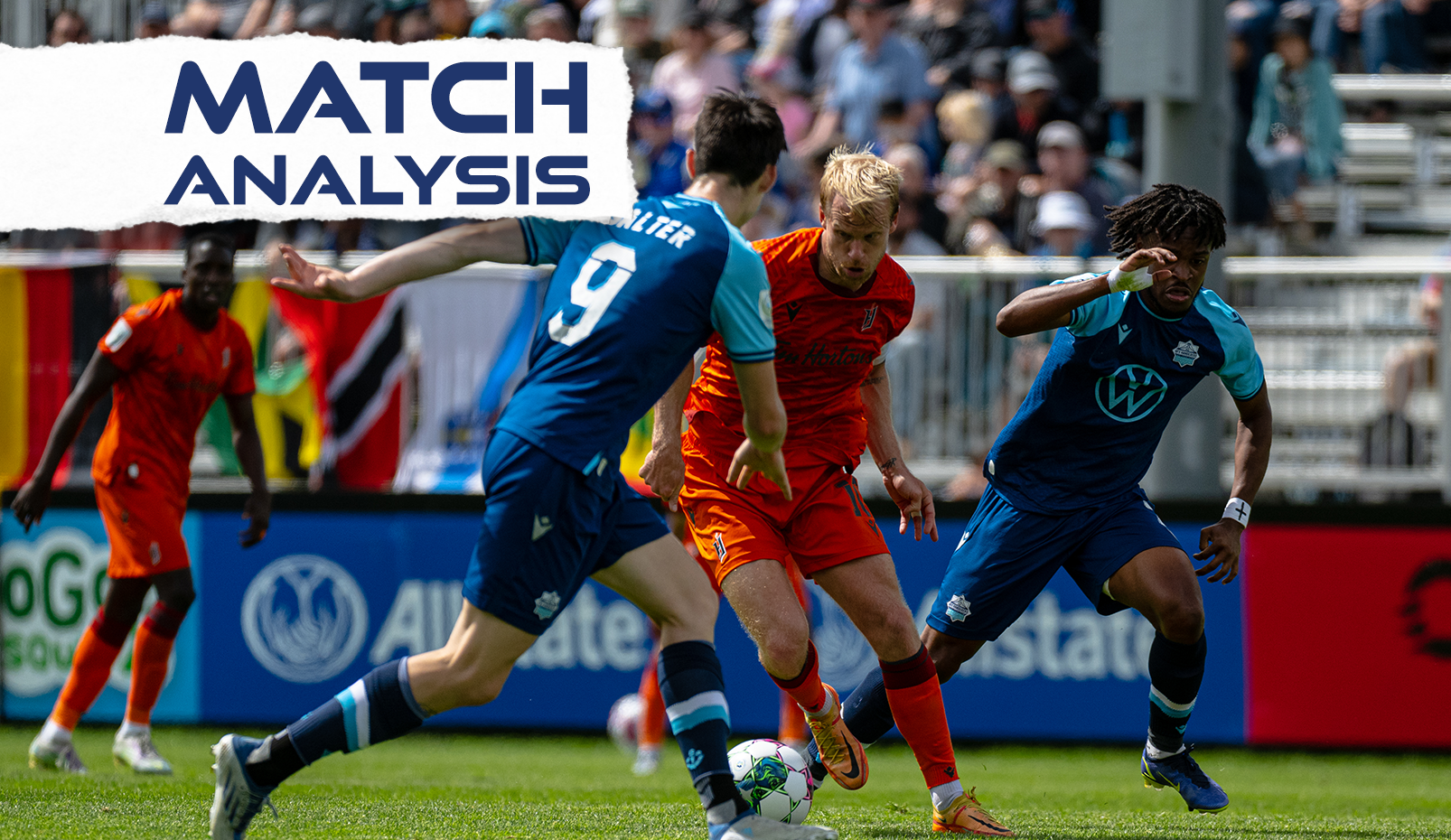 Match in a Minute or Less:

For the second time in a month at Wanderers Grounds, Forge FC came into Halifax hungry on Sunday, and left with all three points.

Woobens Pacius gave Forge an early lead in the 15th minute, smashing home a shot from close range after David Choiniere did all the work on the right side and played a deflected pass into the path of the young striker. Another Forge youngster, midfielder Noah Jensen, doubled the lead ten minutes later, placing a shot into the bottom left corner with his first touch, after Choiniere again found a teammate in the box.

Emery Welshman made it three late on, making no mistake from six yards out after Terran Campbell squeezed through several Wanderers defenders. It was the cherry on top of a comfortable win for the Hammers, who have now won four matches in a row.

Forge’s right side of Choinière and Rama a dynamic duo

Forge’s gameplan on Sunday, as it has been in several games recently, was to make things happen on their right flank through David Choiniere and Rezart Rama.

Choiniere is currently playing some of the best football yet during his time at Forge, and was crucial to both of Forge’s first two goals at Wanderers Grounds. On the first one, he took a backheeled pass from Rama before slicing through four Wanderers players and trying to cut the ball back across the box. It took a deflection on the way through, so it won’t officially count as an assist, but the ball found its way to Woobens Pacius, who smashed the ball into the bottom right corner for his second goal in as many games.

Choiniere picked up an assist on Forge’s second goal, making a run down the right side before playing the ball to Noah Jensen, who also found the back of the net with his first touch, this time into the bottom left corner.

The duo also combined well with Forge’s right-sided central midfielder (and former Wanderers player) Aboubacar Sissoko, creating intricate passing plays down the right flank that opposing players haven’t been able to defend. Sissoko started the season filling in at right back, but since Rama has joined the fold has returned to the midfield and re-established himself as one of the league’s best.

“It’s quite a good duo, that’s the easiest way to put it,” said Forge head coach Bobby Smyrniotis. “Rama is a player I think we don’t talk a lot about. He’s come in here and he’s solidified himself as the best right back in this league — he wins every tackle standing up, he’s excellent in his movement of the ball and how he reads situations.

“I think that gives a lot of confidence to what David Choiniere is doing going forward. They keep it simple between the two of them, they know where they’re moving, where they need to go, and I think that helps. Add Abou Sissoko into that triangle that they form a lot on that right side and I think they’ve been absolutely brilliant.”

“Players need to step up when their number is called”: Wanderers need more from replacements when key players are out

HFX were missing several key players on Sunday, including crucial midfielder Andre Rampersad and Jeremy Gagnon-Lapare, as well as striker Akeem Garcia — and those absences were certainly felt.

Pierre Lamothe and Marcello Polisi were the replacements in midfield, and while both are clearly talented players, lack some of the leadership and grit in midfield that the more experienced Rampersad and Gagnon-Laparé provide. Up top, Garcia may be struggling to actually find the back of the net at times, but he can at least gets into the right positions to score, which his replacement Alex Marshall failed to do on Sunday.

There were a couple of sloppy giveaways in midfield that led to Forge opportunities, especially on the second one scored by Noah Jensen, or players — not just midfielders — being caught out of position with no time to recover as The Hammers quickly counter-attacked. Jensen and Borges combined to steal the ball from Polisi before Borges passed it out wide. Both ran into the box, where it was returned to Jensen for a clinical finish.

Wanderers goalkeeper Christian Oxner told reporters after the match that players need to take advantage of opportunities to start games, and challenged his teammates to be better when they have these chances.

“It’s obviously going to be different, but it shouldn’t matter,” said the HFX netminder about the players who got a chance to start when they usually might not. “It’s the same guys who will sit in the locker room and be upset that they’re not playing. If you get the chance today you have to take it, that’s football. Guys need to have the mentality to step up when their number gets called.

“One guy’s loss is another guy’s opportunity, it will always be like that. They have to maintain the same level that these guys have when they play.”

The most in-form team in the league at the moment, Forge FC are now unbeaten in five matches and riding a four-game winning streak.

They aren’t just scraping out 1-0 wins either, they’re dominating teams. Over these past four matches they have 3-0 and 4-0 wins on the road in Halifax, a 4-3 win in Edmonton in which they were the better team but struggled a bit defensively, and a 3-0 home thrashing of the reigning champions Pacific FC.

It doesn’t get much better than 14 goals and four wins in four games, and Forge’s success is coming as a result of them taking advantage of their chances. Earlier in the season they were getting into the right areas but failing to take advantage of those positions, but recently they’ve been clinical.

“If you get the ball in the right areas of the field you score goals,” Smyrniotis said. “That’s something we didn’t do enough earlier in the season. We got into situations, we just didn’t get the ball in the right places and have ourselves positioned there. It’s something we talk about and look at in our advanced stats, and we work on in training and just make sure the guys understand this is going to give us a better opportunity to score goals.

“We all love the highlight reel goals that go in from 30 metres, but those are bonuses. You need those goals in the half-spaces inside the box and where the final pass is coming from, we know if it’s in there we have a lot of entries into the opponent’s box and into the final third. The guys are getting onto the end of them, and I think we just need to keep that up.”

With their recent surge, Forge have now claimed fourth in the table, with a three point gap over Halifax. They’re one point back of Atletico Ottawa, two back of Pacific FC and three back of first-place Cavalry FC — with at least one game in hand over all of those teams, including three in hand over Pacific.

They have a lot of home games coming up as well, so they may be in prime position to climb to the top of the table and try to hold onto top spot if they keep up their current form.

Forge FC were dangerous all afternoon, and their electric winger David Choiniere played a huge role in that. He only picked up one assist officially, but was also instrumental in Forge’s first goal.