Our 2020 Canadian Premier League season will get underway on April 13th!

The full schedule, presented by Westjet, is out now and with 8 teams this year, the vast majority of matches will be played on weekends with a couple of holiday games.

Good times and summer nights are coming back to the Wanderers Grounds, with 8 of our 14 league home matches on Saturday.

2 more home matches take place on national holidays, as well as a Friday night match and our last game of the season on a Sunday when every team plays at the same time.

We’re buzzing our 2020 campaign is just around the corner with our first match away at York9 FC on Easter Monday, April 13th.

And get ready for a day to remember in Halifax on Saturday, April 25th as we get back to action at our beloved Wanderers Grounds against Atlético Ottawa.

That’s a huge game because it’s our first home match of the new season and marks the first CPL game in Halifax for the new franchise in Ottawa.

“It’s going to be completely different from any game we played last year with it being a new team and with their connections to Atlético Madrid, they may have a Spanish style of play,” said Wanderers midfielder Scott Firth.

The Halifax-born player said he’s itching to get going with training camp starting in March.

“I can’t wait and to play in front of our fans against a new team which is another big thing and I’m sure there will be a sold out crowd.”

Less than a month later, the Wanderers will become the first club to play at TD Place, Ottawa in the CPL as we travel to our nation’s capital for Atlético’s first home match on May 16th.

The CPL champions Forge will be back in Halifax Saturday, May 23rd at 2 p.m.

And we renew our rivalry with Valour FC at our home Grounds on Tuesday August 25th, kicking off at 6 p.m.

Our full schedule of 28 games home and away is here. 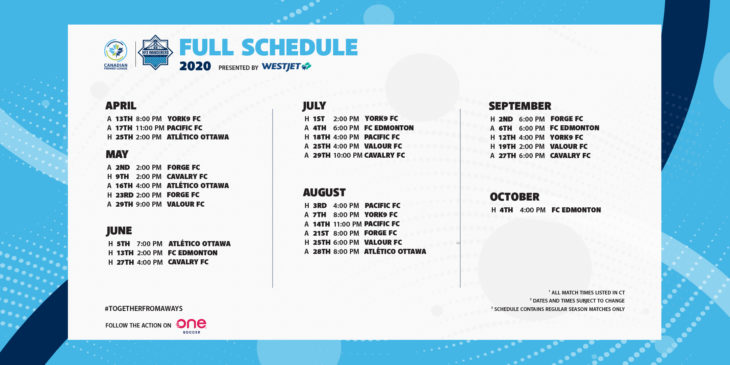 We’re at home for a special Canada Day game against York9 FC, Wednesday July 1st at 2 p.m. and we have another holiday game at home to celebrate Natal Day on Monday August 3rd against Pacific FC.

We close the season at home against FC Edmonton on Sunday October 4th when all teams play simultaneously.

The league’s new format is designed to create more exciting matches to the end of the season, with the top three clubs moving to a playoff series.

The 1st place finisher gets a bye to the final while the 2nd and 3rd compete in playoffs for the other final spot.