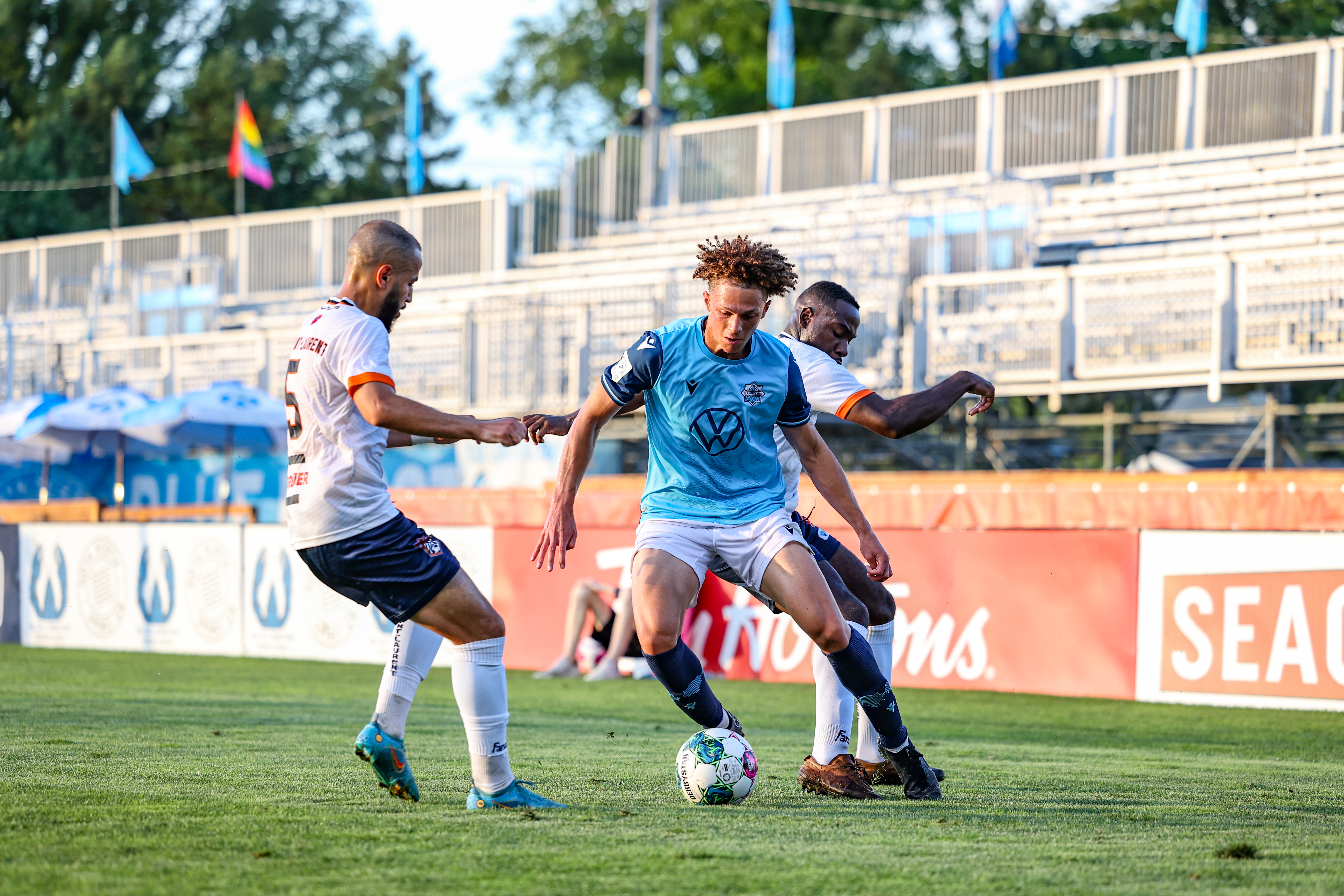 (Allie Lawhon/Halifax Wanderers FC)
‘We showed that we can compete’ Wanderers U23 edge St-Laurent for first victory
August 3, 2022

Suliman Elomrani scored early in the first half to lead Wanderers U23 to a 1-0 victory over CS St-Laurant on Wednesday night. The win closes out a two-match series pitting some of the best young players in Atlantic Canada against competition from the Première ligue de soccer du Québec.

“I’m extremely happy for the players because first of all, they have done a lot to be here and sacrificed a lot to be here,” Wanderers U23 head coach Mesut Mert said post-match. “They really showed their aggression and desire to try and get a goal, and that work ethic paid off.”

The winning goal was the byproduct of players seeing a play through until the end. After a ball into the box looked to be in control of the St-Laurent keeper, U23 forward Luke Berryman helped work it free, and Suliman Elomrani calmly finished it off.

“We just went for the press that we practise in training,” Elomrani said of the play that led to his goal. “So Luke went through to the goalie, and I went from behind, goalie spilled it, and I tapped it in.”

Elomrani, who also plays for Halifax Dunbrack and Dalhousie University, is one of many local products that formed Wanderers U23 for the doubleheader against PLSQ competition. The Wanderers had targeted the men’s U23 age group in a long-term project to provide more opportunities for soccer players in Atlantic Canada.

And to score at the Wanderers Grounds wearing the club crest just added to the occasion on Wednesday night.

“It’s our pathway to the first team,” Elomrani said. “We played against good competition and showed that we can compete against the best.”

⚓️ A fun one at the Stadium tonight as Wanderers U23 defeated CS Saint-Laurent 1-0 👊#TogetherFromAways #COYW pic.twitter.com/4picddtF3c

Both the Wanderers and St-Laurent had their fair share of chances throughout the match; Ryan Robinson and Obeng Tabi nearly finished off a pair of individual runs, while a free kick by Ayoub Al-Arabi almost led to a second goal for the home side.

And the visitors may have found their equalizer if not for the play of Halifax’s goalkeeping tandem of Dan Clarke and Aiden Rushenas. Clarke got his hands to a ball destined for the top of the goal in the dying minutes of the first half, while Rushenas pulled off a double-save late in the second half to preserve the victory.

“Dan controlled everything in the box, and he was brave to challenge their crosses,” head coach Mesut Mert said. “Then Aiden comes in and sees that one off with two big saves. I’m proud of that group.”

For team co-captain Luke Green, the U23s were confident that even if they couldn’t expand on their lead, they would defend it.

“Everyone was responsible and understood their defensive responsibilities, so we knew that we could defend for the rest of the game,” Green said. “And our keepers were amazing, Aiden and Danny were amazing tonight.”

The Wanderers U23 roster was loaded with players from clubs and universities in Nova Scotia, New Brunswick, PEI and Newfoundland. It was a point of pride among the group that they came together to defeat a team as strong as CS St-Laurent.

For co-captain Luke Green — a 19-year-old from Halifax that played for the first team in 2020 — it’s an example of the quality of footballers in Atlantic Canada that just needed a chance to show what they could do.

“We’ve had the talent, we just haven’t had the pathway. Now that this team is here, it’s perfect,” Green said. “Young kids are excited to have the Wanderers, have the U23s as something to strive for. ”

🌊 A message from the Halifax Wanderers Football Club ahead of the first official match for Wanderers U23 ⬇️#TogetherFromAways #COYW pic.twitter.com/PkClJw6UOT

And with the foundation laid for Wanderers U23 and an early victory in the rearview mirror, the future becomes more exciting.

“The idea was to really challenge them to show what they have,” head coach Mesut Mert said. “I think today was the beginning of that, I thought we took a step forward.”